This is an intense series with well-developed characters, complex world building and wonderful narration. 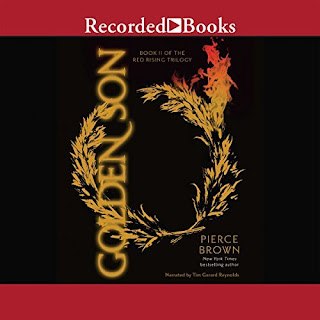 Publisher's Summary
With shades of The Hunger Games, Ender's Game, and Game of Thrones, debut author Pierce Brown's genre-defying epic Red Rising hit the ground running and wasted no time becoming a sensation. Golden Son continues the stunning saga of Darrow, a rebel forged by tragedy, battling to lead his oppressed people to freedom from the overlords of a brutal elitist future built on lies. Now fully embedded among the Gold ruling class, Darrow continues his work to bring down Society from within.
A life-or-death tale of vengeance with an unforgettable hero at its heart, Golden Son guarantees Pierce Brown's continuing satuts as one of fiction's most exciting new voices.
©2015 Pierce Brown (P)2015 Recorded Books


Review:
Darrow was born in the low, slave caste of the reds. Although he had frustrations at unfair treatment, he would have been happy living his life with his young wife, Ieo and their children. Darrow would have given up after Eo was killed by their Gold master, but others took control of his life and destiny. He was reshaped to become one of the Golds, the ruling race, so that he could help to lead a rebellion from a place of strength.

Darrow has successfully climbed through the training and institution programs to accept a close position to the very man who killed Eo. Along the way Darrow has developed a group of loyal followers, the howlers, as well as making extreme enemies of a competitive ruling house. He has given up a possible chance at love to continue his deception and ambitious climb. His work is lonely as with every step there are those who would eliminate him and those who would betray him.

This second book takes Darrow on a vicious roller coaster of highs and lows, loyalty and betrayal. There are allies who are admittedly enemies and enemies who are covertly allies. It is a remarkable ide of imagination and intrigue with well-developed characters and complex world building.

I spent several nights up late listening to this engaging story. I highly recommend the series to fans of other world, dystopian battles for equality.

Audio Notes: Tim Gerard Reynolds does a masterful job on the narration. He makes Darrow and the other characters, as well as the intensity of the situations, come alive. If you like audio, this is a series and narrator not to be missed.


Source: Audible 2017 Credit Purchase. This qualifies for my 2018TBR, Audiobook and Alphabet Challenges.
Posted by Martha Eskuchen at 8:33 PM