This middle book continues the tension in this engaging series.

If I'm Found
By: Terri Blackstock
Narrated by: Kate Rudd 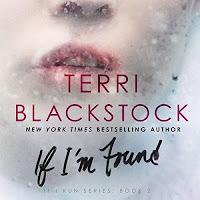 
Publisher's Summary
Is Dylan hunting Casey to prosecute her or protect her?
Casey Cox is still on the run, fleeing prosecution for a murder she didn't commit. Dylan Roberts - her most relentless pursuer - is still on her trail, but his secret emails insist that he knows the truth and wants to help her. He's let her escape before when he had her in his grasp, but trust doesn't come easily.
As Casey works to collect evidence about the real murderers, she stumbles on another unbearable injustice: an abused child and a suicidal man who's also been falsely accused. Casey risks her own safety to right this wrong and protect the little girl from her tormenters. But doing so is risky and just may result in her capture - and if she's captured, she has no doubt she'll be murdered before she ever steps foot in a jail.
In this riveting sequel to the USA Today best seller If I Run, evil lurks, drawing Casey out of the shadows...but there is light shining in the darkness. Is Dylan a provision from the God who loves her or another heartache yet to happen?
©2017 Terri Blackstock (P)2017 Zondervan


Review:
Casey risked herself in her first undercover city by insisting that a missing girl is being held in a basement around the corner. She has to escape and find another location. There she finds work but again becomes involved in a local problem even though it risks her cover.

Other witnesses interviewed by Casey’s murdered friend Brent are turning up dead. Dylan is becoming more convinced that Casey has been framed and he is desperate to reach her before Detective Keegan. Keegan is intent on capturing Casey but Dylan is concerned that the police officer won't return her safely.

This book continues the suspense in the plot. There was a little more development for Casey and Dylan, as well as the villain Keegan who even had a couple of chapters from his view. There is some repetition and some filler that might have been eliminated but then it might impact the trilogy. My hubby and I enjoyed listening to this second book and were excited to read book three.

Audio Notes: Kate Rudd’s narration is an improvement over the narration in the first book. Ms Rudd provides some distinct voices and good pacing. The narration helped me to enjoy this second book.