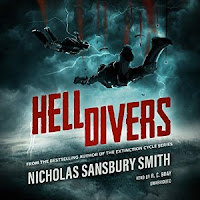 Publisher's Summary
An Audible Editor's Pick of 2016 and An Audible Best of 2016 Science Fiction.
More than two centuries after World War III poisoned the planet, the final bastion of humanity lives on massive airships circling the globe in search of a habitable area to call home. Aging and outdated, most of the ships plummeted back to Earth long ago. The only thing keeping the two surviving lifeboats in the sky are Hell Divers - men and women who risk their lives by diving to the surface to scavenge for parts the ships desperately need.
When one of the remaining airships is damaged in an electrical storm, a Hell Diver team is deployed to a hostile zone called Hades. But there's something down there that's far worse than the mutated creatures discovered on dives in the past - something that threatens the fragile future of humanity.
Narrator Interview: vimeo.com/188195570/ad4a958906
©2016 Nicholas Sansbury Smith (P)2016 Blackstone Audio, Inc.


Review:
Mankind managed to poison their world through nuclear war and waste. There are only two airships remaining with the last human survivors. The captains of the ships continue to look for a safe place to land and recolonize their own world. First, they have to survive in space to find that safe place.

A fierce electrical storm has endangered one of the ships by damaging it and leaving it stranded above one of the most dangerous places on earth, a city known as Hades. Xavier Rodriguez, 'X’, is a Hell Diver on the second ship. Hell Divers are the men and women who accept the challenge of diving to the earth’s surface to scavenge for supplies needed to keep the ships operating. ‘They dive so humanity survives”. But no sky diver has ever returned from Hades. Yet the divers must try as the necessary fuel and repair parts are located in this hostile area.

Hell divers have shortened life expectancy as many perish after less than 20 dives. X is the longest surviving diver with over 90 dives! He leads a team to the edges of Hades hoping to find supplies on the outskirts. Instead of supplies they find a horrendous monster of great strength and agility, with the ability to climb walls and even fly. These mutant monsters, dubbed ‘sirens’, are vicious killers who eat the prey they catch.

X has been an almost careless diver since he lost his wife a few years back. But a new death leaves him in charge of his best friend’s young son, a child prodigy. X faces the most dangerous dive of his life as he and the other team members agree to dive into Hades to seek the needed supplies.

X was initially presented as a cold, uncaring character but the author did develop his traumas and his depths. I think my favorite character is the boy, Tin. I also liked the captain who fights personal health issues as she desperately tries to save her ship and humanity There is plenty of action in this story, but I wasn’t fully enthralled. It may be because it borders on a horror story but that shouldn’t bother me too much. I felt the beginning was a bit disjointed and maybe I never got back on track. Still, I enjoyed the intense entertainment and I will probably continue with the next book at some point.

Audio Notes: R. C. Bray does a fine job with the narration. He provides depth to the tense scenes and gives the characters unique voices. The narration follows the story with precise timing and pacing. The narration enhanced this reading experience for me.