I really liked this surprisingly engaging tale which is business trading rather than space action.
Quarter Share
A Trader's Tale from the Golden Age of the Solar Clipper, Book 1
By: Nathan Lowell
Narrated by: Jeffrey Kafer 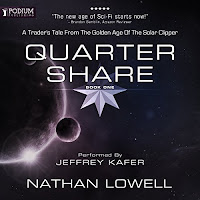 Publisher's Summary
What if we sent freighters instead of frigates?
In a universe run by corporations, where profit matters more than life, how can an orphan with no skills, no money, and no prospects survive?
When Ishmael Wang's mother dies in a senseless accident, he's given a choice: leave the planet on his own, or the company will remove him. To avoid deportation Ishmael finds work as a mess deck attendant on an interstellar freighter.
Find out what Ishmael must do to earn his Quarter Share.
©2013 Nathan Lowell (P)2016 Podium Publishing


Review:
Ishmael’s mother dies when he is 17, leaving him on his own with no place to go. Ishmael takes the initiative to get a job as a mess deck attendant on an interstellar freighter, the SC Lois McKendrick. One of his first acts in his new position makes an impression and secures his job. Ishmael knows nothing about space freighters or protocol, but he gets a little help, learns quickly and works hard.

Ishmael’s mess companion and ‘trainer’ is a young man named Pip, a small fellow who left another freighter where he was mocked and bullied. Pip is from a trading family and uses his family skills to enhance his meager wages by trading goods. This task is a balancing act as each spacer only has so much weight allotment on ship and must fit trade goods within that limit as well as within their monetary budget.

Pip and Ishmael begin to combine their efforts to make a few trades. This process expands until it has a surprising impact on the other crewmates and even the ship officers of the SC Lois McKendrick.

There is fascinating detail of day to day life and interaction on a mercantile space ship. Ishmael is a wonderful character with clever ideas and a good work ethic and an attitude that encourages cooperation. I am not a huge fan of coming of age tales, but I found this fully entertaining. It doesn’t have the usual action of military battle that I am accustomed to so I was even more surprised at how engrossed I became. I enjoyed the tensions, surprises and successes of the crew. I plan to pick up the next book fairly soon to follow the bartering talents of Ishmael, Pip and his crew mates.

Audio Notes: Jeffrey Kafer does a fine job with the narration. His voice fit the young, direct personality of Ishmael. He also presents appropriate accents for Pip, Cookie, the Captain and the other crew members. The narration added to my enjoyment of this story.