This is a good crime suspense with a detective whose wry humor is similar to the Andy Carpenter series.

Fade to Black: A Doug Brock Thriller
by David Rosenfelt 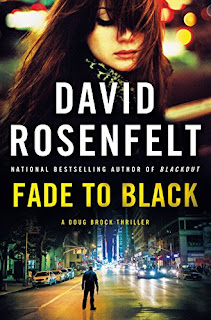 
In Fade to Black, the thrilling sequel to Blackout from David Rosenfelt, policeman Doug Brock helps a fellow victim of amnesia untangle a murder case and discovers he may not be as distant as he thinks.
After getting shot in the line of duty, New Jersey state police officer Doug Brock has been busy rebuilding his life. He’s reunited with his fiancé and started to get some of his memories back. He hopes he can continue to recover with the help of an amnesia support group and that the damage from his past isn’t permanent.
It isn’t until fellow group member Sean Conner approaches him after a meeting that Doug realizes the trouble is just beginning. Sean has discovered in his attic what can only be called a scrapbook of a murder victim, but he has no recollection of the girl’s identity or why he might have gathered this information. Doug agrees to help and convinces his captain to open what had been a cold case. When he discovers that he had a personal connection to this case, suddenly he’s questioning everything he thought he knew about the case, about Sean, and about his own past.
In the next page-turning thriller by David Rosenfelt, Doug Brock is back to delight readers and keep them guessing until the end.


Review:
NJ police officer Doug Brock suffered an injury that stole years of his memory. He is just getting back on duty with his partner, Nate. His fiancé. Jessie, works in the investigative unit so they get to spend time at work and at home.

Doug is attending a group with other victims of memory loss. One of them asks to meet privately and then asks Doug to check the circumstances of an old murder. Doug begins to look at the old case but it takes on even more new interest when the group member turns up murdered.

One step of the investigation leads to another until Doug suspects there is a larger problem. Soon they are on a race to uncover a killer and or the mystery before a threatened event occurs.

I liked the mystery and suspense that built. There was a surprise twist that made it even more interesting, along with the race at the end to prevent the terrorist act.

I enjoyed the dry banter and wit which are a Rosenfelt staple. I am accustomed to reading or listening to the Andy Carpenter series and could hear (in my head) the same type of character traits in this story. The romantic relationship is very similar to Andy and his love too. That isn’t a bad thing since I enjoy those books too.

I enjoy Rosenfelt’s style of intense mystery with characters who have real personalities and snark. I hadn’t read the first book in the series but this one read acceptably as a stand alone. I recommend this book and this author to those who enjoy police thriller mystery stories.


Source: NetGalley; Title released March 13, 2018. This qualifies for my NetGalley, 2018TBR and Alphabet Challenges.
Posted by Martha Eskuchen at 9:44 PM