#NetGalley Review: The Forgotten Beasts of Eld by Patricia A. McKillip

This is a beautiful story full of emotional magic.
The Forgotten Beasts of Eld
by Patricia A. McKillip 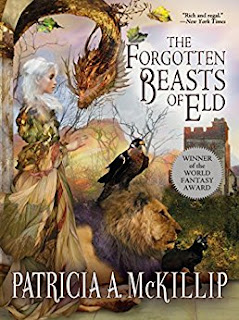 Young Sybel, the heiress of powerful wizards, needs the company of no-one outside her gates. In her exquisite stone mansion, she is attended by exotic, magical beasts: Riddle-master Cyrin the boar; the treasure-starved dragon Gyld; Gules the Lyon, tawny master of the Southern Deserts; Ter, the fiercely vengeful falcon; Moriah, feline Lady of the Night. Sybel only lacks the exquisite and mysterious Liralen, which continues to elude her most powerful enchantments.

But Sybel's solitude is to be shattered when a desperate soldier arrives bearing a mysterious child. Soon Sybel will discover that the world of men is full of love, deceit, and the temptations of vast power.


Review:
Sybel inherited her wizardly gifts that include calling and controlling magical beasts. Her mother died in childbirth and her father raised her until he died when she was only 12. She has lived in her mountain mansion alone except for her beautiful animals who are the stuff of myths and legend.

One day a soldier brings an infant to her gates and asks Sybel to protect him and raise him. She knows nothing of human infants but agrees and seeks help from the witch who lives down the hill. Sybel learns that her Tamlorn is the greatest of her treasures as the boy grows but she doesn’t know what will happen as he approaches adulthood.

The soldier, Coren, returns when Tam is a young lad of 12 seeking to take Tam to the world of men. Sybel is drawn to the soldier who has so much information regarding her animals but she will not release Tam. A few years later Tam is seeking his father and King Drede comes up the mountain in search of a rumored son.

Sybel learns the heartaches of the world of men as Tam’s curiosity seeks his own history… and the truth of his parentage. COREN is enchanted by Sybel but she does not know the world of emotions involved with men and she cannot understand the deep bitterness that COREN has that drives him to seek revenge against his enemy. The King also is enthralled by Sybel but he makes a terrible mistake in trying to capture her as his own.

This story is enchanting with the wonderful beasts who speak, often in riddles. They don’t seem to mind terribly being caged by their gentle mistress although some of them do chaff and want things beyond her territory. Their reactions as the tensions escalate between the opposing tribes of men are an interesting element added to the tale. The story speaks to the human heartaches of love and hate, and the poison and losses that spread from bitterness and obsessive revenge. The story evoked emotions, high and low, in me as I feared what might happen and wondered at events that did happen.

The writing is beautiful with a lovely fairy tale quality. I was not familiar with most of the named beasts and, as far as I know, this is an original fairy tale. I highly recommend this to readers who enjoy fairy tale fantasy.


Source: NetGalley 2017. This qualifies for 2018TBR, NetGalley and Alphabet Challenges.
Posted by Martha Eskuchen at 6:17 PM