This started slowly but really picked up! 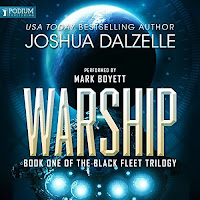 
Publisher's Summary
From Joshua Dalzelle, author of the best-selling Omega Force series, comes an all new vision of humanity's future.
In the 25th century, humans have conquered space. The advent of faster-than-light travel has opened up hundreds of habitable planets for colonization, and humans have exploited the virtually limitless space and resources for hundreds of years with impunity. So complacent have they become with the overabundance that armed conflict is a thing of the past, and their machines of war are obsolete and decrepit. What would happen if they were suddenly threatened by a terrifying new enemy? Would humanity fold and surrender, or would they return to their evolutionary roots and meet force with force?
One ship - and one captain - will soon be faced with this very choice.
©2015 Joshua Dalzelle (P)2015 Podium Publishing


Review:
Humans have conquered space but still have seen no aliens in the 25th century. Resources are abundant and space travel has provided sufficient living spaces so there has been peace and no wars for centuries. The last fleet of warships are years old, without the speed and technology of the more recent ships. Of course, the recent ships don’t have the weapons that the older ones do. But no one thinks they need sophisticated weapons… or even to maintain the old ones.

Captain Jackson Wolfe is an Earther so he is looked down upon by many; especially by his superior Admiral. She is looking for any reason to get rid of him. She assigns a new Executive Officer to the ship which is already full of sailors who are considered less than top notch. Based on the Admiral’s recommendation, the consortium which governs has chosen to retire the black fleet of unused warships. The Admiral sends Wolfe and his ship on a fairly routine mission. The only quirk is a detour to deliver an arrogant Senator’s aide to a secretive meeting. The man turns out to be more than expected as does the mission.

Wolfe flies into a settled colony system and is confused by what he discovers. Although some think he should turn and run, he chooses to investigate. The findings are even more alarming and set Wolfe and ship on a new, unapproved course. Wolfe sends his reports back to the Admiral but gets a rejected reply. Meanwhile Wolfe is pursuing a dangerous enemy. He has to call upon his ragtag crew, not of all whom are supportive, to make the ancient weapons work and to help strategize to face a killing foe.

The story started slowly but once the mystery of the passenger and then the mystery of the enemy begins, it gets really engaging. I really enjoyed the crew interaction, including the mysterious passenger who has a connection throughout the journey. I liked how the crew was able to find means of fixing and using the old weapons to attack a much stronger enemy. They may be the underdogs but they aren’t going out without a fight.

There is some bad language but not excessive. I will definitely continue listening to this exciting series. I recommend this to space marine, sci fi fans.

Audio Notes: Mark Boyett does a fantastic job with the narration. He nails different voices and conveys the emotions of disdain, confusion, determination and more. The narration enhanced my enjoyment of this story.