Entertaining but it seemed time to wrap up this series.

Dead Ever After
A Sookie Stackhouse Novel, Book 13
By: Charlaine Harris
Narrated by: Johanna Parker 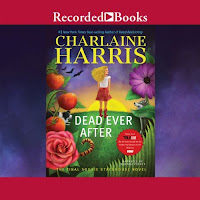 Publisher's Summary
Number-one New York Times best-selling author Charlaine Harris has won numerous awards for her Sookie Stackhouse Southern Vampire series, which has been adapted into the hit HBO show True Blood. In this 13th and final book, a murder rocks the town of Bon Temps and Sookie is arrested for the crime. After making bail, she sets out to clear her name - but her investigation only leads to more deaths.
©2013 Charlaine Harris, Inc. (P)2013 Recorded Books


Review:
In the last book Sookie used a magical artifact to save Sam’s life. This has a ripple effect as Eric thought she should have used it for him, others wanted the artifact for themselves, and Sam isn’t sure yet how he feels being brought back to life.

An old friend turned enemy returns to Bon Temps and ends up dead after visiting Sookie. Sookie has an alibi but the detective doesn’t seem to want to listen. A collection of Sookie’s friends show up to help bail her from jail and help her investigate several strangers in town. Sookie narrowly escapes several attacks during the investigations and it just isn’t clear if the vampires want her dead, the fairies, the humans or all of the above.

The continuing love seesaw between Sookie and Eric (always intense but ephemeral) and Sookie and Sam (always at arm’s length) finally gets a push which some readers will be like while others will be disappointed. I was fine with the teeter although the ending result was a little weak.

I enjoyed stepping back into Sookie’s world to wrap up the series. Some of the character abilities seemed weaker and others stronger without a good explanation. Still, I liked the murder investigation and the suspense which gave this story some substance. Otherwise I think this concluding episode seemed somewhat anticlimactic. I certainly wouldn’t recommend anyone jumping into the series at the ending, but it had to end somewhere and this is as good a time to wrap as any.

Audio Notes: Johanna Parker does a fine job with the narration. She is the voice of Sookie and manages to convey her quirky personality and also presents the other characters distinctly. The narration enhanced by enjoyment of the series.