Book Review: Who'll Stop The Rain: (Book One Of The Miami Crime Trilogy) by Don Donovan

This is well written, gritty but entertaining, noir fiction; there are no 'good guys'; only degrees of corrupt characters.
Who'll Stop The Rain: (Book One Of The Miami Crime Trilogy)
by Don Donovan 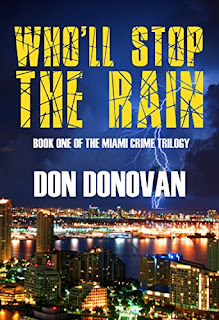 "I slowed way down for the speed bumps on the narrow, wet street. The cemetery loomed in its eternal silence on our right, and I felt the eyes of the dead opening under heavy lids to watch us pass by in the rainy night, somehow knowing we were on our way to do murder, to send them some company."
From the mean streets of Miami, Hialeah, and Key West comes this sprawling noir novel of three hardened individuals:
LOGAN, career criminal from Key West who is fed up with his outlaw life, but can't escape it.
MAMBO DeLIMA, gambling boss of Key West, who is being muscled by out-of-town racketeers and is determined to face them down.
SILVANA MACHADO, the first female detective sergeant in the Miami PD's homicide division, who gets her results through violence and intimidation.
In this first entry in The Miami Crime Trilogy, Don Donovan has spun a tale of separate South Florida characters whose lives are woven together into a web of money, betrayal, and murder.
"... classic noir, written as noir was intended to be written."
-- David Beckwith, Key West Citizen


Review:
This “noir” fiction is different from my usual read. Mr. Donovan provides a very entertaining, if gritty, tale of thieves, local crime family leadership and corrupt cops. The setting was interesting as I lived in south Florida although I really had no contact with the criminal elements of these communities.

The story is told from three viewpoints; first person from Logan and third person for the others. Logan is a thief who was practically raised into crime. His current theft activities have resulted in more violence than he likes. He is planning to retire, with the continued encouragement of his longtime girlfriend, if only he can find a legitimate job that will allow them to continue to live their comfortable life.

Mambo is a local crime boss, happy with the profits of his gambling and drug networks. He struggles to prove himself to his grandfather, one the local ‘mob” leaders. His grandfather is just partnering with the other competing crime family in the Keys, working towards legitimate business endeavors. In spite of his grandfather’s instructions to shut things down, Mambo wants to protect his position against a racketeer from Little Havana who is hustling in on his territory.

Silvana Machado, is a tough officer who was raised in the streets but managed to work her way into a respected position. She is a successful homicide sergeant, known to get results through intimidation and violence rather than detective skills.

Silvana has uncovered clues that point to Logan as the possible killer of three scum criminals in Little Havana. No one would care about the deaths except the third victim was a teenage niece to a commissioner. Even though the girl was obviously where she didn’t belong, the family wants the killer found and brought to justice. Silvana’s other leads are tying the mess to a local racketeer who seems to be in a contest with the Key West crime boss, Mambo.

The author weaves the characters into a neat crisscross of crime connections and consistent action. The story is well plotted and skillfully written in a tight, direct style that is appropriate to the noir genre. The emotions of the characters and their reactions create interesting elements for the reader to contemplate. Although the story is full of grit, crime and corruption, it is entertaining in somewhat a perverse manner for a reader like me who prefers good forces and heroism. I recommend this to readers who enjoy crime novels and the darker edge of noir fiction.


I received this from the Author for an honest review. It qualifies for my Mount TBR Challenge and "W" for ebook in Alphabet Challenge.
Posted by Martha Eskuchen at 2:35 PM