I really enjoyed this shapeshifter story. 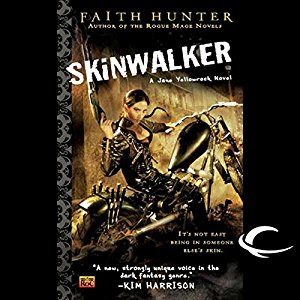 Publisher's Summary
Jane Yellowrock is the last of her kind - a skinwalker of Cherokee descent who can turn into any creature she desires and hunts vampires for a living. But now she's been hired by Katherine Fontaneau, one of the oldest vampires in New Orleans and the madam of Katie's Ladies, to hunt a powerful rogue vampire who's killing other vamps.
©2009 Faith Hunter (P)2010 Audible, Inc.


Review:
Jane Yellowrock is a unique creature- skinwalker of Cherokee descent. She can transform into other creatures but her primary figure is the “beast” that shares her soul. Jane has developed a reputation for her successful career in hunting vampires. In this modern-day vampire community the “vamps”, as Jane somewhat disdainfully calls them, are out of the closet. They are bound by certain rules regarding blood slaves and protecting innocents from rogue killers. The vampire hierarchy have hired Jane to track and eliminate a rogue vampire that is leaving brutalized bodies in his wake.

Jane has found the rogue but discovers that the killer has more in common with her than a vampire gone bad. She can smell death on him…not just the death of victims but the rogue’s own decay.

Jane has to disable spy cameras and watch her back as there are others following her as she tracks and gathers clues. Several men seem to be interested in Jane physically and one of the major vampire family heads is pushing hard to learn her secrets.

The rogue causes damage close to Jane’s temporary home and he appears to be accelerating out of control. Jane is racing to meet the deadline and get the bounty bonus. But when the dust has settled, Jane has made a major a new enemy who is set on eliminating her, no matter who or what she is.

The story gives a bit of Jane’s childhood background so the reader gets to know how she has developed her current K-A, self reliant attitude. The beast senses enhance Jane's own keen senses and skills just as her “beast” weapons add to Jane’s full pack of human weapons. There is plenty of action and I liked the POV switch offs between Jane and her “beast.” Jane also has some witch friends, a mother and a precocious child, who will make good additions as support characters. I will be glad to pick up more in this series for future entertainment.

Audio Notes: Khristine Hvam does a fine job with the narration. She pulls in the southern accents and different voices for the elite vampires, the cops and the secondary support. I also enjoyed the beast narration. I will continue to listen to this series.


I picked this from my Audible TBR. It qualifies for Mount TBR, Audiobook Challenge and for "S" in Alphabet Challenge.
Posted by Martha Eskuchen at 9:53 PM