This is a tense, engaging post-apocalyptic thriller. 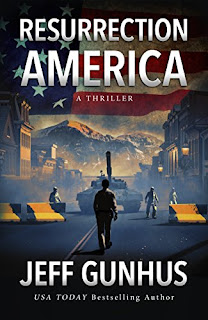 
USA TODAY bestselling author Jeff Gunhus.
In the near-future, the world order has deteriorated after America's exhaustion from endless foreign wars causes her to pull back within her borders. Her enemies and allies alike pursue their own interests, grabbing resources, erecting trade barriers, and launching opportunistic wars. The American Century is a distant memory.
Sheriff Rick Johnson thinks he's left behind the problems of the greater world, retiring from the Marines to become the sheriff of the little town of Resurrection, Colorado. His relationship with Dahlia, his childhood friend's widow, has given him new purpose, along with the responsibility of being a father-figure to her young son. Life isn't perfect, but it's better than he ever expected it would be after seeing the horrors of war. But when helicopters and armored vehicles filled with soldiers in hazmat suits unexpectedly quarantine the town, Sheriff Rick Johnson feels like the nightmares of the outside world have followed him home.
While the town follows martial law, Rick isn't buying the official version of events from the military that a virus has been released into the air. As he investigates, the cover story unravels and he discovers the military's presence and the salvation they offer isn't what it seems. Soon he and his ex-flame, scientist Cassie Baker, are entangled in a plot so evil that it could only be bourn from the absolute extremes of nationalism and madness.
There are men in Resurrection who are willing to do anything to see America restored to her former greatness, even if the rest of the world must be destroyed to make it happen. But Rick Johnson is a man willing to do anything to protect the people he loves. And he's a force to be reckoned with.


Review:
Rick is a former marine who has settled as Sheriff in the small town of Resurrection, Colorado. He suffered enough in war and his is glad to have an easy-going job and hopeful of building a relationship with an old friend’s widow, Dahlia, and her young son, Charlie. When Rick gets a strange radio call from his deputy which is cut off, he heads up the old mine road to check on him. Instead of finding his deputy, Rick finds a large fence closing off the mine and a man, Keffer, who offers him $10,000.00 to keep quiet for three days. Rick isn’t interested in the bribe but is willing to stay quiet for the extra millions the man assures will be forthcoming to the town from the secret entity that is reopening the mine with robotic assistance.

The town is hosting thousands of visitors to a festival that weekend when an alarm sounds, a helicopter hoovers overhead, tanks appear in the streets and snipers appear with guns aimed at the crowd. A warning issues from the loud speakers that the town has been exposed to radiation but that the men are there to issue a live-saving inoculation. No one understands what is happening and Rick really doesn’t believe the story, especially when he sees and hears actions inconsistent with Keefer’s explanation.

Rick tries to challenge Keefer, but even his friends think he has had a PTSD episode and is delusional. Getting locked in his own jail cells with his ex-wife, a biochemist from the company that previously worked the mine, is the only thing that might give them a chance to save Dahlia, Charlie, the community and visitors. Keefer’s proclaimed goals are to save America and restore her position as a superpower. Sadly, the extent of his plan moves into madness and extremism.

This is a rather scary scenario and gets more alarming as the secret lab and the expected use of the captured citizens is revealed. One can hope that the science is only fiction although somehow I think the possibility might exist in the future. A few scenes do stretch believability but that’s why they call it “fiction”. That didn’t lessen my enjoyment of the fast moving, suspenseful plot. The primary characters are well developed and I liked the relationship between Rick and those he loves. There is good action and an ironic twist at the end. I recommend this to readers who like apocalyptic tales that have a different storyline.


I received this through NetGalley for an honest review. It qualifies for my NetGalley Challenge.
Posted by Martha Eskuchen at 4:46 PM