This is a solid EOTW, biochemical (zombie) story with a strong lead character and good action. 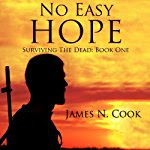 Publisher's Summary
Eric Riordan was once a wealthy man leading a comfortable, easy life. Until one day Gabriel, his oldest friend, Marine Corps veteran, and a former mercenary, told him how the world was going to end.
He did his best to prepare. He thought he was ready for anything.
He was wrong.
As the dead rise up to devour the living, one man finds himself struggling to survive in the ruins of a shattered world. Alone, isolated, and facing starvation, his only chance is to flee to the Appalachians and join forces with Gabriel. But the journey will not be easy, and along the way his humanity, his will to live, and his very soul will be tested.
This is the beginning. This is his story.
©2011 James N Cook (P)2013 James N Cook


Review:
Eric is a wealthy man, not a military man. He and Gabriel, Gabe, became friends during the sale of land between them. Sometime later, Gabe warns Eric to prepare for a chaotic collapse of the world. Gabe is a former Marine and former mercenary who has reason to know of biological secrets that could endanger society.

Eric had the money to prepare a bunker and stock it with food and weapons. He thought he was ready – but who can really prepare for the bloody rising of the dead? After staying alone in his own bunker for a time, Eric sets to meet up with Gabe who is hunkered down in a cabin in the mountains.

Along the way Eric faces danger and rescues a young man from an attack of the undead and returns with him to a compound of survivors. Some of the survivors are thankful but some are resentful and untrusting. Eric remains and proves his good intent as he helps the group clearing local communities of infected so they can gather more supplies. Sadly, the undead are not the only enemy that the survivors must face. There are rival survivor groups who are lawless and brutal.

I really liked Eric’s strong, well developed character. The survivor group he works with is well developed also. Mr. Cook does a good job of creating an engaging story with a good balance of human elements and action. There is gore and bad language but it is not the focus of the story but rather part of the situation.

There are also grammatical errors which might be attributable to the nature of the characters… otherwise it is just inadequate editing. I let them slide. There are a few slower segments but for the most part the story pacing moves along well. I did not realize that this series is already up to 8 books. I will likely continue to read at some point, although not immediately. I recommend this to readers who like well written, catastrophic, end of the world (EOTW), scenarios.

Audio Notes: Guy Williams does a good job with the narration. I found it is easy to listen and follow the characters. There did not seem excessive emotion but adequate to convey the scenes of the story. The narration added to my enjoyment of the story.


I picked this from my Audible TBR shelves. It qualifies for Audio Challenge, Mount TBR and "N" in Alphabet Challenge.
Posted by Martha Eskuchen at 12:25 PM