This is an engaging story of alien enemy confrontation and human survival. 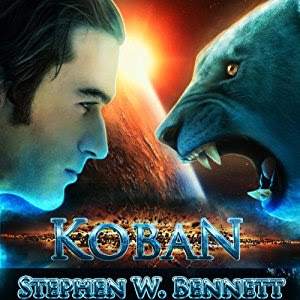 Publisher's Summary
All new narration adds sound effects and eliminates issues noted in reviews. To obtain new version, remove old one from device, download new copy at no charge.
We colonized seven hundred planets. Humankind enjoyed the benefits of expansion and the end of wars. We disbanded our military.
Then the Krall found us.
The Krall have used thousands of years of combat to select the genes of the strongest and fastest warriors. They are a species determined to dominate the galaxy, through annihilation or enslavement of every opponent.
Koban is an uninhabited high gravity planet with impossibly fast savage animals, which employ organic superconducting nerves. This deadly world is where the Krall are testing humans for fighting capability. We are useful only if we can fight well. If not, they will destroy us swiftly, as they have other species. They have slaves, and we’re poor tasting meat animals, so we fight or die. The Krall will use us, if worthy, seeking physical perfection through attrition of war, one planet at a time.
Growing weary of our failures in testing, the ruthless Krall are on the verge of a decision to eliminate our species. A ship carrying bio-scientists is captured for combat testing. The choice for Captain Mirikami and the scientists is simple: Prove we can produce better, smarter fighters quickly, or humanity is doomed to rapid extermination.
But the Krall are only half the problem. We must survive Koban's gravity and superfast animals. The tiger-like rippers with skin contact telepathy are predators too fast and powerful for the Krall to face. Our solution is genetic: If you can't beat them as you are, become human rippers.
The Krall will learn another species can bypass natural selection.
©2012 Stephen W Bennett (P)2013 Stephen W Bennett


Review:
Humankind has had hundreds of years without wars and without the need for military forces. It is now a race dominated by women who took over to remove the aggressive warring natures of men. Captain Mirikami is somewhat rare as a male captain but he and his crew were deemed appropriate to deliver a scientific expedition to a human station out on the rim. Rather than finding human response, Mirikami and his ship are threatened and boarded by an alien species that introduces itself as the Krall.

The Krall are a warrior race who has strengthened itself through biological and genetic breeding of its strongest. Their goal is to control the universe through superior power and conquest. The planet Koban is a high gravity planet where the Krall are at home and humans at a distinct disadvantage. Koban is full of super strong and super-fast predators, as well as large prey. The Krall consider Koban their ‘home’ planet even though so far it has been used primarily as a testing ground.

The Krall are always seeking prey to fight that can help further develop their fighting skills. They bring humans, or other ‘prey’ races, to Koban where they are pulled out at regular intervals to be tested against Krall training warriors. Some races have become slaves and one is even raised as a food source. The humans don’t taste that good so they are used as fighters. Their weaker strength makes them little opposition and the Krall are thinking of just eliminating the race that provides little challenge or value.

The Krall capture Mirikami’s ship and suddenly discover an enemy that is challenging due to its strategies and cunning if not its strength. The humans on Koban are provided some hope of surviving, but an initial success may be short lived. The Krall return from further space conquest with a large group of human ships, passenger and cargo. Because of the success of Mirikami’s fighters the Krall are excited about seeking more humans to fight. The Krall set off to search out humans to conquer but decide to leave the humans on Koban to face the elements of the planet without the walls of the compound and without power. The Krall don’t realize that humans don’t give in so easily.

I really liked Captain Mirikami and the primary officers, doctors and other characters who eventually become part of his core team. The combination of intelligence and innovative thinking shows the resilience of humankind. They also have additional help that they kept secret from the Kralls that will add to their survival efforts.

The world-building is well done with natural enemies in the environment as well as the Krall characteristics and internal politics that come into play. The action and scheming run throughout the story. One element that was a bit distracting was character chuckling although it is not clear if that was a written element or narrator interpretation. I was engaged sufficiently that I am eager to continue the saga with the next book. I do recommend this to readers who enjoy action stories with strong alien conflict and human survival elements.

Audio Notes: The beginning audio is a little dry and maybe I was expecting inferior narration based upon earlier reviews. However, after an hour or two I found the narration by Patrick Freeman to be effective with the character voices and personalities. He captures the growls and snorts of the Krall as well as the snark, humor and strengths of the human characters. I didn’t think the addition of the chapter break sounds and few background sounds was really necessary although the sound effects didn’t detract from the listening experience. I was fully engaged by the story and narration so that this 25 hours+ went very quickly.


I picked this from my Audible TBR shelves. It qualifies for Mount TBR, Audiobook and "K" for Alphabet Challenge.
Posted by Martha Eskuchen at 5:30 AM