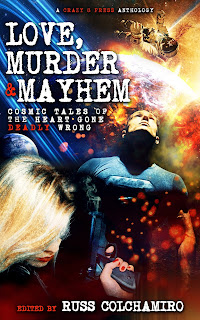 
Review:
This is an interesting collection of 15 short stories with superheros, villains, detectives, and aliens. Several of the stories are good mysteries and others were wonderfully funny with twists. There were a couple of stories near the beginning that left me wondering what was the goal or purpose; perhaps the authors have better longer works, but the shorts seemed incomplete with abrupt endings. It is worth reading beyond these to get to some marvelous stories.

The middle three stories are my favorites. First, The Note on the Blue Screen by Mary Fan. The primary character, named Watson, is a genius with a humanoid roommate designed as ‘Project Sherlock’. Sherlock takes after her name sake as a detective complete with a bad habit of taking drugs. One evening Watson returns home to find Sherlock sprawled on the sofa. Whether she is a victim of suicide or murder, the police won’t care. Waston finds a blue screened note that is supposedly from Sherlock but doesn’t quite fit her writing and phrasing. Watson knows it is up to her to decode the message, determining the clues that Sherlock left to solve her last big case. This was fun deduction and one of my favorites.

The next is The Hardwicke Files: The Case of My Old New Life and the One I Never Knew by Russ Colchamiro. This story involves two friends, a murder, a fire and an open and shut case… or so it seems. The protagonist is an investigator whose gut tells her that there is something in the facts that has been overlooked. This is another good mystery unraveled.

A third good story is As Time Goes By by Patrick Thomas. This is the story of a small-time criminal, a Daring Don’t named Tempus Fugitive. After serving time for his crime he is convinced by his wife and a hero Daring Do to use his powers for good. His change of heart isn’t appreciated by everyone. There are those that insult him and his wife and then there are those who try to blackmail him. This ends with an ironic twist.

Also fun were The Responders by Michael Jan Friedman, Invasive Maneuvers by Hildy Silverman and DuckBob: Killer Service by Aaron Rosenberg. I enjoy reading collections like this because it gives me a sample of writing by authors that I can search out. I recommend this collection to readers who enjoy short sci fi stories and mysteries.


I received this review invite from Bookish Indulgenges with b00k r3vi3ws. 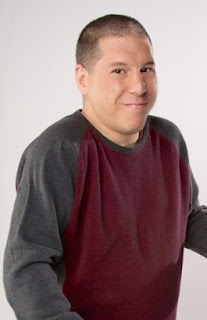 Russ Colchamiro is the author of the rollicking space adventure, Crossline, the hilarious sci-fi backpacking comedy series, Finders Keepers, Genius de Milo, and Astropalooza, and is editor of the new anthology, Love, Murder & Mayhem, all with Crazy 8 Press.


Russ lives in New Jersey with his wife, two children, and crazy dog, Simon, who may in fact be an alien himself. Russ has also contributed to several other anthologies, including Tales of the Crimson Keep, Pangaea, and Altered States of the Union, and TV Gods 2. He is now at work on a top-secret project, and a Finders Keepers spin-off.
As a matter of full disclosure, readers should not be surprised if Russ spontaneously teleports in a blast of white light followed by screaming fluorescent color and the feeling of being sucked through a tornado. It’s just how he gets around — windier than the bus, for sure, but much quicker.