This is a beautifully written story of friendship, loss and growth. 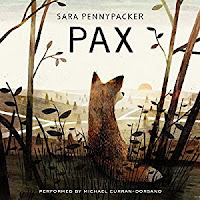 Publisher's Summary
Pax and Peter have been inseparable ever since Peter rescued him as a kit. But one day the unimaginable happens: Peter's dad enlists in the military and makes him return the fox to the wild.
At his grandfather's house 300 miles away from home, Peter knows he isn't where he should be - with Pax. He strikes out on his own despite the encroaching war, spurred by love, loyalty, and grief, to be reunited with his fox.
Meanwhile Pax, steadfastly waiting for his boy, embarks on adventures and discoveries of his own....
From best-selling and award-winning author Sara Pennypacker comes a beautifully wrought, utterly compelling novel about the essential truths that define us and the devastating costs of war. Pax is destined to become a beloved classic.
©2016 Sara Pennypacker (P)2016 HarperCollins Publishers


Review:
I was drawn by the cover and blurb of this title. I had hoped it would be good for my grandchildren to listen to but I think they would have to be middle grade and up.

Peter has raised Pax since a young kit who lost his parents. Peter is now 12 and his father has enlisted in the military to help protect the homeland. His father insists that Pax be dropped off in the woods as he delivers Peter to another town to live with his grandfather while father is away a war.

After arriving at his Grandfather’s Peter realizes what a mistake it was to have left Pax behind.
He takes his backpack and a few supplies to return to the woods to get his beloved Pax. Two hundred or so miles away, Pax waits at the edge of the woods for ‘his boy’ to return for him. Finally, the little fox must move to find water and food. Pax meets a vixen and her little brother. The young kit is thrilled to play with Pax but the vixen smells humans on Pax and wants nothing to do with him. Pax makes friends with an older fox who agrees to travel with him to try to go back home to meet with Peter.

Peter meets a gruff female who lives a secluded life. She was traumatized by her experience as a soldier and withdrew from society. She isn’t thrilled to have a young boy show up in her barn but she can’t send him back out without helping him.

The story is told in alternating views for Peter and Pax. They both run across obstacles and dangers along their journey to find each other. I really liked the warm bond between Peter and Pax. They grow in their new situations and they find friends to help them and whom they help. The author uses the story to comment on war, love, injury, society, friendship and even environmental issues. I liked how it makes the reader/listener think about our behavior towards each other and nature.

The reason I hesitate to recommend this for younger listeners is because there is death and loss that might be difficult without parental guidance. Not that the young haven’t dealt with these issues before in classics like Old Yeller, The Yearling and even Bambi, Dumbo and the Lion King. I found the story beautifully written, engaging and sweet. I do recommend it - perhaps for family listening.

Audio Notes: Michael Curran-Dorsano does a wonderful job with the narration. He captures the feelings of Peter and Pax, as well other characters. His narration pulled me in and kept me listening. The narration enhanced my enjoyment of this story.


I selected this audio as a children’s title when on sale at Audible. It qualifies for my Audio Challenge.
Posted by Martha Eskuchen at 11:30 AM