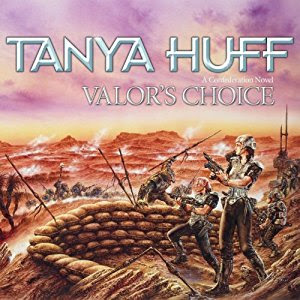 Publisher's Summary
In the distant future, humans and several other races have been granted membership in the Confederation - at a price. They must act as soldier/protectors of the far more civilized races who have long since turned away from war.
©2000 Tanya Huff; (P)2008 Tantor


Review:
Staff Sergeant Torin Kerr has seen her share of battle – sometimes with more success than others. Her platoons last encounter with the Others had left a good chunk of the soldiers in sick bay and desperately seeking shore leave for a break. Kerr already started her break the evening before having met an intoxicating di’Taykan and enjoyed a vigorous night of pleasure. It is only due irony that the man turns out to be her new commander.

Her platoon isn’t ready for another assignment but that is what they are getting. At least it isn’t a battle assignment but rather their job will be to serve as honor guard, escorting diplomats on a mission to gain agreement from the Silsviss to join as an ally with the Confederation as they fight against the Others. The Silsviss are an extremely large, strong, reptilian race who consider battle prowess as the measure of success. This is the first time a delegation has been sent to their planet and success isn’t guaranteed.

Most of the assignment goes well, with only a few rough encounters. However, on the last trip before the vote is to be taken, the ship Kerr’s platoon is on is shot down into a reserve where the young Silsviss men are placed to contend for survival and command. The platoon has to find its way across unfamiliar terrain while trying to escape attack of hyped up Silsviss.

I really enjoyed the writing style which includes effective bantering dialogue and lots of action. There were hints to determine the enemy but the primary characters were too busy fighting to spend much time speculating. Kerr is a kickin’ female lead who carries the story. I enjoyed the different alien input too. The story is engaging and I recommend it to sci fi fans who like military action in space. I will likely pick up more in this series.

Audio Notes: Marguerite Gavin is a wonderful narrator whose voice I recognized from several series I like. She does a good job with this work too, presenting different sounds and voices for the human and alien characters. The narration added to my enjoyment of the book.


I pulled this from my Audible TBR shelves. It qualifies for Mount TBR, Audiobook Challenge and "V" in my Alphabet Challenge
Posted by Martha Eskuchen at 7:48 PM