This is an engaging fantasy with strong history and clockwork elements.
The Clockwork Dynasty
by Daniel H. Wilson 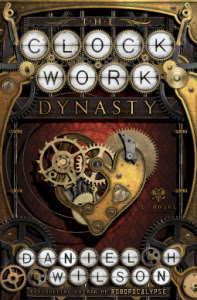 An ingenious new thriller that weaves a path through history, following a race of human-like machines that have been hiding among us for untold centuries, written by the New York Times bestselling author of Robopocalypse.
Present day: When a uncovers a terrible secret concealed in the workings of a three-hundred-year-old mechanical doll, she is thrown into a hidden world that lurks just under the surface of our own. With her career and her life at stake, June Stefanov will ally with a remarkable traveler who young anthropologist specializing in ancient technology exposes her to a reality she never imagined, as they embark on an around-the-world adventure and discover breathtaking secrets of the past…
Russia, 1725: In the depths of the Kremlin, the tsar’s loyal mechanician brings to life two astonishingly humanlike mechanical beings. Peter and Elena are a brother and sister fallen out of time, possessed with uncanny power, and destined to serve great empires. Struggling to blend into pre-Victorian society, they are pulled into a legendary war that has raged for centuries.
The Clockwork Dynasty seamlessly interweaves past and present, exploring a race of beings designed to live by ironclad principles, yet constantly searching for meaning. As June plunges deeper into their world, her choices will ultimately determine their survival or extermination. Richly-imagined and heart-pounding, Daniel H. Wilson’s novel expertly draws on his robotics and science background, combining exquisitely drawn characters with visionary technology—and riveting action.


Review:
June learned to love old trinkets from her grandfather. He had a special relic that she inherited upon his death. Now June is an anthropologist specializing in ancient technology and making old clockwork pieces work. Her services have been funded by a special company but each time she reaches a new destination it appears that someone has been one step ahead, taking the relics and sometimes destroying the evidence.

The most recent stop at an ancient monastery reveals a beautiful clockwork doll. It is missing its innards but June is able to jerry rig power to get it operating long enough to write a secret message before the building begins to collapse around them. Suddenly her guide announces that her funding has been withdrawn and her job is over.

Soon the guide and June are facing attack by a dark man with super human strength. June tries to escape but it doesn’t look good. Then another super human man steps in between. June isn’t sure if he is trying to save her or also trying to take her family relic.

The current day events alternate with events from history beginning in 1709 and moving forward. These chapters introduce and follow a clockwork man, Peter, and his child-like beautiful ‘sister, Elena.’ Peter and Elena were created for a specific purpose and centered with an internal “word” that shapes their actions. Peter seeks Justice in all things while Elena pursues logic. Although they have a close relationship it is strained by their different goals.

I really enjoyed the automated characters, particularly Peter who shares the story lead with June. The history detail that is shared is fascinating. Parts of the story were a tad slow but these are offset by good action and intrigue. There is a dark tone and images that brought thoughts of the Terminator.

The plotline runs with a metaphysical twist as it moves to a tense and explosive climax. I thought the writing was crisp and the story creative. I recommend this to readers who enjoy clockwork or cyborg stories with great historic detailing.


I received this from NetGalley and it adds to my NetGalley Challenge.
Posted by Martha Eskuchen at 10:26 PM