Audible Book Review: Until the End of the World by Sarah Lyons Fleming

Strong character connections help make this an entertaining zombie tale.
Until the End of the World
Written by: Sarah Lyons Fleming
Narrated by: Julia Whelan 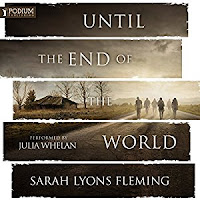 Publisher's Summary
Cassie Forrest isn't surprised to learn that the day she’s decided to get her life together is also the day the world ends. After all, she’s been on a self-imposed losing streak since her survivalist parents died: she’s stopped painting, broken off her engagement to Adrian and dated a real jerk. Rectifying her mistakes has to wait, however, because Cassie and her friends have just enough time to escape Brooklyn for her parents’ cabin before Bornavirus LX turns them into zombies, too. This is difficult enough, but Cassie’s tag along ex-boyfriend and her friend’s bratty sister have a knack for making everything, even the apocalypse, more unpleasant. When the two attract a threat as deadly as the undead to their safe haven, Cassie’s forced to see how far she’ll go to protect those she loves. And it’s a lot farther than she’d anticipated. This, coupled with Adrian’s distant voice on Safe Zone Radio and, of course, the living dead, threaten to put Cassie right back into the funk she just dragged herself out of. Survival’s great and all, especially when you have leather armor, good friends and home-brewed beer, but there’s something Cassie must do besides survive: tell Adrian she still loves him. And to do that, Cassie has to find faith that she’s stronger than she thinks, she’s still a crack shot and true love never dies.
2014 Voice Arts Award Winner
2015 Audie Finalist - Solo Narration, Female
©2013 Saray Lyons Fleming (P)2014 Podium Publishing


Review:
Cassie insolated herself after the sudden, accidental deaths of her parents, including pushing away her fiancé, Adrian. Her parents were survivalists and got along great with Adrian who was set to open a farm focused on experimental growing techniques. Two years after shutting down, and with the strong, continued encouragement of her best friends, Penny and Nelly, Cassie has finally decided to ditch the new, but wrong for her, boyfriend, and get her live back on track. Unfortunately, there is an obstacle to her plan… a virus is spreading in the cities that turns the infected into aggressors who then become the violent undead.

Cassie and her friends first gather at her apartment where she has some supplies, thanks to her parents insisting on being prepared. The group includes Penny and her younger, sister, Ana, Nelly, James, a computer geek co-worker, and just declared ex-boyfriend, Peter. A hostile Peter and crush bitten, bratty Ana, are sure that the virus is under control and will pass quickly. The others insist that things will get worse before they get better. When they hear that the city might be closed off, they decide to head out to Cassie’s family place in the hills of Pennsylvania.

The teens face ‘zombie’ attacks before they can get out of the city and reach Cassie’s home-place. Once they reach the hometown they must pass through a blockade to get to the secluded cabin. They are helped by an older neighbor who continues to work with them. Although they hoped the town and cabin would be safe, they soon discover that not only are there undead to kill but there are evil men taking advantage of the lawlessness. James manages to get a radio going and they can hear the reports of distant safe communities, including one in Vermont that is run by Adrian.

I really enjoyed the warm friendships and natural personalities of the characters. Cassie is much stronger than she realizes and her strong friends have to keep reminding her of this. Nelly is a college friend of both Adrian and Cassie and he is a wonderfully strong character adding to the story. Although this has clear YA elements, like the spoiled brat, jealousies and immaturity, it also has a strong enough storyline and character growth to make it good entertainment. There are losses and some of the ending is predictable but there are some surprises too. I recommend this to readers who like YA stories and like zombie danger and action.

Audio Notes: Julia Whelan delivers a strong performance with the narration. She helps the character personalities to come alive, adding to the entertainment value of the story.


I picked this from my Audible TBR shelves. It qualifies for Audio Challenge, Mount TBR and "U" in Alphabet Challenge.
Posted by Martha Eskuchen at 10:02 PM