Book Review: The Path of the Bullet by M C Jacques

This is a fast read and engaging mystery.

Path of the Bullet
by M C Jacques 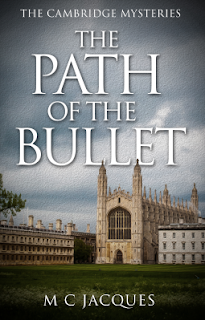 
A ruthless assassin at large in the UK and heading for a target in Cambridge… an office steaming with jealousy and passion… a hero’s body found in a war museum and a disconsolate man – gnawed at by ghosts from his distant and recent past – charged with finding the murderer.
With a steadily increasing fusion of murder, intrigue and suspense, the floundering Mark McKay finds himself thrown onto a hotbed of deception, fraud, incest and even a neo-Nazi’s murderous intent.
Set in Cambridge at around the turn of the millennium, The Path of the Bullet, the first of the new Cambridge Mysteries series, explains how McKay forsakes his hermitic existence on the Lincolnshire coast and becomes attracted to the beautiful city of Cambridge in both mind and body.


Review:
Mark McKay has personal issues but responds promptly to the call of a friend to investigate the murder of a soldier at the Royal War Museum. As McKay begins to interrogate the workers, he discovers there have been numerous acts of sabotage kept quiet. He also gets several leads that point to one female employee, Sarah Millar. There is a theory that the killing may have had connection to a terrorist cell. McKay visits the bar and café near Sarah’s apartment, running into several Arab characters.

McKay gets help through email research provided by an American journalist who was an old college friend. He also coordinates with the local police. McKay gets mugged early in the investigation. Later a second body is discovered with two different bullet wounds that confuse the investigation even more.

The story starts out and moves at a very fast pace. In the first few pages it is easy to be confused by multiple suspects but the author repeats the list at about 12% making the characters and their connections clear as they are explained to McKay. I liked McKay’s character and I really liked the British jargon and descriptive, fast tone of the writing. It felt the story was on fast forward which was disconcerting for that first 10% but after that I liked it. The story and action blended well to keep me engaged. There is a bit of time jumping where the author moves forward in time so that some of the comments are reminisces but I found that to be an interesting technique. I would be interested to read more in this series. I recommend this to readers who enjoy a fast, PI centered mystery.

I received this title through NetGalley for an honest review. This qualifies for NetGalley Challenge, TBR Triple Dog Dare and March 2016 TBR Challenge.

Posted by Martha Eskuchen at 6:50 PM