This is a quick, ironic portrayal of management concerns. 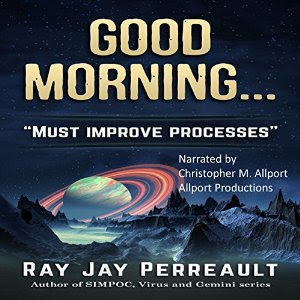 
Review:
Ah – irony strikes again in sci fi. Robert felt shorted at his last posting and it seems the company officials have punished him by sending him to a remote station to work in solitary, except for a computer companion. He is transferred to Saturn’s Titan production station to work with the AI in producing methane for shipment to the corporate overseers. The advanced AI computer has been developed to work with the single human operative and improve production in any way possible. As management, the computer applies different methods to motivate the human operative. The computer is still testing what is the best approach for humans – praise, fear, nagging, comparisons?

The story is told through the dialogue between the two characters. It progresses through the monthly changes and challenges addressed by Robert and "Tessi", the AI. Robert has to deal with typical factory type struggles that include shorted supply requisitions, failed deliveries, and overheard conversations that are shared by Tessi. How successful will the year of work be?

This was a quick, interesting vignette of large company issues. I liked the incorporation of the computer as a character and management tool. Anyone having to deal with quota production might find this humorous .... or at least appreciate the irony. I recommend this to readers who would enjoy a quick, ironic view of a computer in management position.

Audio Notes: It took me a bit to get used to the voices portrayed by Christopher M. Allport. Initially

I thought the computer voice could be more distinctly robotic but then I realized that, like HAL in 2001 Space Odyssey, it was intended to have more of a personality. Then the narration made sense and I appreciated how Mr. Allport succeeded in conveying the escalating tension and frustration between the two characters.


I received this from the author through Audiobook Blast. This qualifies for my Audiobook Challenge and G on Alphabet Soup.
Posted by Martha Eskuchen at 1:00 PM