This is a scary thriller that touches on timely issues of technology and privacy.
The God's Eye View
by Barry Eisler 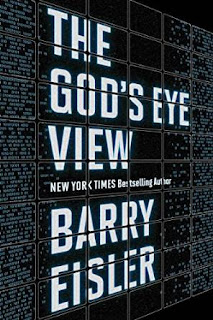 Knowledge is power…and they know everything.

NSA director Theodore Anders has a simple goal: collect every phone call, email, and keystroke tapped on the Internet. He knows unlimited surveillance is the only way to keep America safe.

Evelyn Gallagher doesn’t care much about any of that. She just wants to keep her head down and manage the NSA’s camera network and facial recognition program so she can afford private school for her deaf son, Dash.

But when Evelyn discovers the existence of an NSA program code-named God’s Eye, and connects it with the mysterious deaths of a string of journalists and whistle-blowers, her doubts put her and Dash in the crosshairs of a pair of government assassins: Delgado, a sadistic bomb maker and hacker; and Manus, a damaged giant of a man who until now has cared for nothing beyond protecting the director.

Within an elaborate game of political blackmail, terrorist provocations, and White House scheming, a global war is being fought—a war between those desperate to keep the state’s darkest secrets and those intent on revealing them. A war that Evelyn will need all her espionage training and savvy to survive. A war in which the director has the ultimate informational advantage: The God’s Eye View.


Review:
Evelyn is a computer analyst with special skills and duties within the NSA network. She has reported suspicious activity between an agent and a reporter to her boss, the Director, Theodore Anders. When her reports begin to lead to a series of deaths, Evelyn becomes concerned about how the information is being used.

The Director has a secret computer program dubbed “God's Eye”, which allows the Director to watch people everywhere. He would like the Congress to pass legislation allowing NSA broad access to cameras and phones. The Director is convinced that the need to know, and to protect the public, supersedes all privacy issues. Until he is able to get more government and public support for his agenda, the Director will do whatever is needed to protect his secret programs.

Director Anders has two assassins he directs to his purposes. One, Delgado, is a man who relishes his work and completes his tasks in brutal fashion. The second, Manus, is a deaf man who was recruited by Anders from a dismal youth to be trained with special skills. Manus has been his loyal servant ever since; following directions without question.

Anders assigns Manus to get close to Evelyn who has a deaf son. Neither Manus nor the Director realize the impact the assignment will have.

This story is very timely in light of government drones and more recently with the conflict between the FBI and Apple to balance investigation goals with privacy issues. Any technology that can be used for spying is subject to abuses. I like to hope that the leaders don't really get this extreme but...it's scary because it could happen, or be happening.

The characters are well developed and I liked the dynamics between Evelyn and Manus as well as those between Anders, his assistant and his 'clean-up' team. There were a few loose threads at the end but that doesn't negate the suspense getting there.

This is full of action and suspense, sometimes with brutal killing. The writing was straight forward, engaging, and made for good reading. I caution readers who may be squeamish about violence, but highly recommend this political thriller.


I received this through NetGalley. It qualifies for my NetGalley Challenge.
Posted by Martha Eskuchen at 5:30 AM