This has good characters and engaging action and suspense…plus a dog. :-) 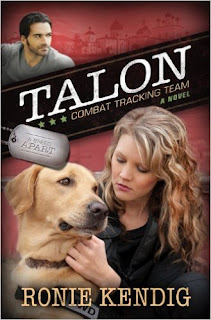 Aspen Courtland is out to find her missing brother. Only his combat tracking dog, Talon, knows where to look. Problem is, after a brutal attack that separated dog and handler, Talon’s afraid of his own shadow. The search is on, but when one mistake means disaster, can Talon muster the courage for one last mission?


Review:
Aspen Courtland was in the military service, but not in combat. She manages her own activities to keep fit, including boxing. She is working with her missing brother’s combat tracking dog, Talon. Aspen is half preparing for the chance to go abroad to look for her brother. If only she had a hint that he was alive and where to look.

Cardinal was raised in a very difficult situation. Now he is a government “asset” staying low and waiting for the chance to find his missing protégé, Austin Courtland. He finally gets the “go ahead” and reaches for another resource that he needs to locate Austin: Talon. Cardinal doesn’t tell his secrets – to anyone. He won’t be telling Aspen his connection to her brother but he needs the dog. What Cardinal didn’t plan on was Aspen as the handler who has to come along with the dog to find Austin.

Aspen, Talon and Cardinal, and a few friends, go to Africa to try to pick up the trail where Cardinal thinks he last saw Austin. Talon has bonded with Aspen but it isn’t clear if he is totally ready as he is still suffering from PSTD. Things become very tense and the team comes under fire. Aspen grows closer to Cardinal and tries to make him break from his secrets. Then a threat comes to challenge Cardinal with Aspen and Talon witnessing.

Cardinal is a dark loner and wonderfully conflicted character. His darkness is balanced – and challenged -- by Aspen’s sweet nativity and trust. I enjoyed the conflicted romance, the action, the dog element and the faith references, even though I thought there could have been some capitalizing on God’s control.

I (and the other book club ladies) really enjoyed the story as a whole. However, there are issues. The story bounces between characters but this is a style that Ms. Kendig uses. I have read some of her other military books and she jumps between scenes and characters as the story builds so that was okay for me. A couple of the characters have multiple aliases so you have to figure out who is who. I recognized several of the characters from the Quiet Professionals series by Ms. Kendig. The underlying conspiracy of corruption involves some of those characters without having filled in backstory. It would have been nice to provide that connection although it isn’t totally necessary to enjoy this story. There were also unexplained or loose ends: how was some of the intelligence of the enemy obtained? How did everyone get time off at the end?

So it wasn’t perfectly executed but it was still engaging. I recommend it to those who enjoy military action, military dogs and of course a romance with a rogue hero.

I picked this title up at a good price last November for our Ladies Book Club. I count it for TBR Triple Dare, March 2016 TBR Challenge and "T" in Alphabet Soup.


GIVEAWAY: Two Winners:
One (gently read) PRINT COPY
US Only for Print; Worldwide for eBook

(Don't forget to fill in the form for entry!
I have noticed a few commenters who forgot to enter through the Form.)
For 3 Extra Bonus entries
(a) comment on the review, OR
(b) Visit the Author's website and tell me something you learned or like there.

* This contest is open to US only for Print Copy.
* This contest will close 5 PM (Central) March 14 , 2016.
WINNER WILL BE ANNOUNCED after March 14, 2016.
Winners will have 72 hours to respond on the winners form linked in the announcement or by email.
Posted by Martha Eskuchen at 9:20 PM