This is a YA sci fi with some interesting dynamics; engaging enough.
Derelict
Written by: LJ Cohen
Narrated by: Bill Burrows 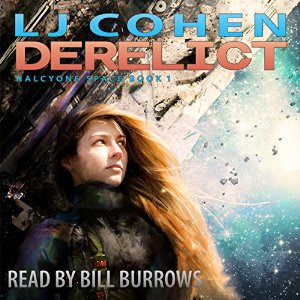 Publisher's Summary
When Rosalen Maldonado tinkers with the derelict freighter, she's just hoping to prove she deserves a scholarship to University. She certainly doesn't count on waking the ship's damaged AI or having three stowaways, Micah Rotherwood and brothers Jem and Barre Durbin, along for the ride. They all have their private reasons for hiding aboard and lives they are seeking to escape, but if the accidental crew can't work together and learn to trust each other, they'll die together, victims of a computer that doesn't realize the war ended decades before any of them were even born.
©2014 Lisa Janice (LJ) Cohen (P)2015 Lisa Janice (LJ) Cohen


Review:
Rosalen is a young teen who is brilliant with computers. Her cold hearted and abusive father refuses to sign papers for a university scholarship. Ro begins to tinker with a derelict freighter moored outside of their space station. She runs into another troubled teen, Micah, the son of one of the higher ranking officers. Micah is doing secret botany experiments on the freighter. Ro suspects his work may be illegal but she is willing to keep his secrets in exchange for hers.

Ro discovers another hidden cargo on the freighter that she thinks is connected to her own father. She is intent on getting the derelict ship to operate to show her own skills even if that action plays into her father’s plans. Ro enlists help from a younger friend, Jem, who has great programming skills. Jem doesn’t realize Ro’s intent but when he begins to think she can activate the ship he drags his brother Barre onto the ship too. Barre is a gifted musician but their doctor parents don’t appreciate his music. They are ready to send him away which would separate the brothers.

Ro manages to activate the damaged AI on Halcyone. When the ship takes off like a scared rabbit, it takes the combined efforts of Rosalen and Jem, with surprising input from Barre, to get and keep control of the AI. The teens are all in trouble just for being on Halcyone but they face greater danger from two leaders back on the station who are intent on getting the ship’s hidden cargo. They will take drastic measures, without regard to the lives of the teens, to complete their covert plans.

The story has some usual YA elements including dysfunctional parents and teenage angst as they try to establish independence. Each of the four teens struggles in their family settings with different reactions. I liked the inclusion of the AI as a side character and really enjoyed the unique interplay of the characters’ skills that allowed the teens to succeed only by working together. I didn’t care for the handling of the friendship of Ro with another female working in communications. The story moves a bit slowly at first with the introduction and development of the characters. Further on there is good action and suspense.

There are some unrealistic events near the end, but the ending leaves the storyline open to allow more adventures for Halcyone and the teens. I would like to listen to the next book to see where the author takes the characters. I recommend this particularly to readers who like easy sci fi.

Audio Notes: Bill Burrows does a good job with the character voices and the portrayal of emotions. I am pretty sure I would not have enjoyed reading this in print/ebook as much as I enjoyed listening to it.


I received this audio from the publisher through Audiobook Jukebox. This qualifies for my Audio Challenge and the March 2016 TBR Challenge.
Posted by Martha Eskuchen at 11:27 PM