This is a delightful, engaging cozy mystery with grand characters and an interesting setting.
The Cracked Spine: A Scottish Bookshop Mystery
by Paige Shelton 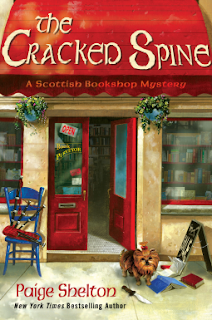 Wanted: A bold adventurer who wants to travel the world from a comfortable and safe spot behind a desk that has seen the likes of kings and queens, paupers and princes. A humble book and rare manuscript shop seeks a keenly intelligent investigator to assist us in our search for things thought lost, and in our quest to return lost items to their rightful owners.

Never an adventurer, no one was more surprised than Delaney Nichols when she packed her bags and moved halfway across the world to Edinburgh, Scotland to start a job at The Cracked Spine, a bookshop located in the heart of the city. Her new boss, Edwin MacAlister, has given her the opportunity of a lifetime, albeit a cryptic one, and Delaney can’t wait to take her spot behind the desk.

The Cracked Spine is filled with everything a book lover could want, each item as eclectic as the people who work there; the spirited and lovable Rosie, who always has tiny dog Hector in tow; Hamlet, a nineteen-year-old thespian with a colored past and bright future; and Edwin, who is just as enigmatic and mysterious as Delaney expected. An extra bonus is Tom the bartender from across the street, with his cobalt eyes, and a gentle brogue—and it doesn’t hurt that he looks awfully good in a kilt.

But before she can settle into her new life, a precious artifact goes missing, and Edwin’s sister is brutally murdered. Never did Delaney think that searching for things lost could mean a killer, but if she’s to keep her job, and protect her new friends, she’ll need to learn the truth behind this Scottish tragedy.


Review:
Delaney, who loves books and old things, was laid off from her museum job in Kansas where she has lived her whole life. When she sees an ad for a ‘bold adventurer to search for lost things’ she decides to journey to take a job at ‘a humble book and rare manuscript shop’…in Edinburgh, Scotland.

Delaney arrives in Edinburgh excited to start her job at The Cracked Spine. She is helped by a friendly cabdriver, Elias, who practically adopts her. Delaney meets her boss, the wealthy and seemingly eccentric Edwin, and co-workers, the young acting student, Hamlet, and a mostly cheery bookkeeper, Rosie, with her shoulder ‘drape’ dog, Hector. Delaney spends one day with Edwin at a secretive auction where she meets three of his friends who express worries about Edwin and his sister, Jenny, who was supposed to join them but didn’t show. Before Delaney can even explore the overstuffed bookshop with its secret nooks, or learn her duties at work, tragedy strikes when Jenny is murdered.

Delaney has a special knack for finding lost things, especially books. It seems that a special item has gone missing and it may be related to Jenny’s murder. Was she killed because of the object? Did the object lead Jenny to the wrong people? Were any of Edwin’s friends involved? Even Hamlet is carefully questioned by the detectives. Delaney enlists the help of her new friend, Elias, to run her around town to do her own questioning of suspects, while Elias’ wife helps put together pieces of a torn letter Delaney slipped out of Jenny’s apartment. As Delaney relentlessly pursues the murder mystery, she gets the chance to flirt with sparks of romance with a handsome barman who owns the smallest pub in Edinburgh.

I was pulled in by Delaney’s warm character, and the promise of a fun story, within the first chapter. I liked each new character as they were introduced and enjoyed the character development. The mystery was well plotted with a twist that kept the murderer a surprise till the end. Not only is Delaney's investigation engaging, I also enjoyed the vivid descriptions and the Gaelic accents that the author shares.

This is a wonderful cozy mystery and I do hope there will be more in this series with these friendly and quirky characters. I noted this book is offered in audio. I listened to the sample and I think it would be a really fun listen. I am inclined to check out more series by Paige Shelton in the meantime. I highly recommend this to readers who enjoy a good, cozy mystery with warm characters and lovely setting.


I received this through NetGalley for an honest review. It qualifies for my NetGalley Challenge and TBR Triple Dog Dare as I selected this back in December, 2015.
Posted by Martha Eskuchen at 5:30 AM