This is another grand crime thriller for Eve, Roarke and Peabody. 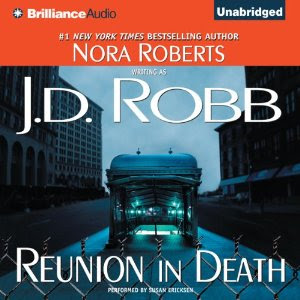 Publisher's Summary
At exactly 7:30 p.m., Walter Pettibone arrived home to over a hundred friends and family shouting, "surprise!" It was his birthday. Although he had known about the planned event for weeks, the real surprise was yet to come. At 8:45 p.m., a woman with emerald eyes and red hair handed him a glass of champagne. One sip of birthday bubbly, and he was dead.

The woman's name is Julie Dockport. No one at the party knew who she was. But Detective Eve Dallas remembers her all too well. Eve was personally responsible for her incarceration nearly ten years ago. And now, let out on good behavior, she still has nothing but bad intentions. It appears she wants to meet Dallas again - in a reunion neither will forget...
©2013 J. D. Robb (P)2013 Brilliance Audio, Inc


Review:
NY homicide detective, Lieutenant Eve Dallas, and her successful businessman-husband, Roarke, have returned from a relaxing vacation. Initially Eve has no pressing cases so she pulls a cold case and begins to work it with her aide, Peabody. Soon a murder comes in to pull Eve's attention so she gives the cold case to Peabody as a side assignment as they begin the pursuit of the new murder.

Very quickly Eve suspects the MO of a female killer she put behind bars years before. Sure enough, the woman has been released from prison and has lined up targets, including Eve and Roarke. This sets up conflict between the strong-headed couple as they jockey for ways to protect each other and to capture the deadly enemy.

Peabody's intriguing parents arrive to make matters interesting on the home front. Eve isn't the most comfortable hostess and now she has to play nice with this unusual and sensitive couple.

Eve's chase of the murderer has Roarke accompanying her to Dallas and Italy. I laughed over the city girl's reaction to the country setting, keeping in mind the futuristic aspects that result in Eve being unfamiliar with farm smells and critters.  On the other side of the globe, Eve has to work her way through the red tape of the Italian police hoping to get to their suspect before she slips back to US where she is likely to go after Roarke.

As always, there is plenty of good action and police procedure as well as engaging dialog. There is emotional trauma as Eve faces her childhood memories in Dallas. I liked how Peabody’s parents came to appreciate her skills and career choice as she got to cut her teeth on a case of her own. There is some POV, head hopping that works with this series.

This is a reliably wonderful series with each book presenting police suspense and personal conflicts among the characters. Although the stories could be read out of order I recommend starting at the beginning so you can enjoy the development of the character relationships.

Audio Notes: Susan Ericksen once again does a stellar job of narration. She added the voice of the villain and Peabody’s parents to her already wonderful range of characters. I always enjoy the listening experience for this series.


This is from my own Audible Library, picked up last year. It does qualify for my Triple Dog Dare, my Audio Challenge and R in my Alphabet Soup Challenge.
Posted by Martha Eskuchen at 5:30 AM