Audible Book Review: Agenda 21: Into the Shadows by Glenn Beck

This is an engaging dystopian following book one. They both have an agenda to educate the public to the dangers of the Agenda 21 policies.
Agenda 21: Into the Shadows
Written by: Glenn Beck
Narrated by: Jeremy Lowell, January LaVoy 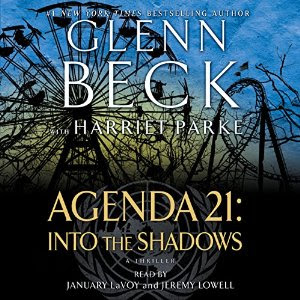 Publisher's Summary
The sequel to Agenda 21, from number-one New York Times best-selling author and nationally syndicated radio host Glenn Beck.
"I knew those men were our enemies, but they, like everyone else in the Republic, were nothing more than servants. Rule followers. They had no choice. But I did. I had a choice and I made it. I knew then and there that, no matter what happened, I would never go back. Never."
It was once named America, but now it is just "the Republic". Following the worldwide implementation of a UN-led program called Agenda 21, the once-proud people of America have become obedient residents who live in barren, brutal Compounds and serve the autocratic, merciless Authorities.
Citizens mainly keep their heads down and their mouths shut - but Emmeline is different. When the Authorities took her mother away, she started questioning the world around her. What happened to her mom? Why is everyone confined to grim living spaces and made to eat the same food cubes every day? Why was her own baby taken from her to be raised in the Children's Village? And are the rumors that somewhere out beyond the fence live those who got away during the Relocations - the so-called shadow people - really true?
When Emmeline's questions lead to the realization that she will never see her child again, she decides to escape the Compound with her partner David and their baby Elsa. Fleeing the armed enforcers of the Earth Protection Agency, and facing the unknown for the first time in their lives, Emmeline and David run into the shadows in the desperate hope of finding something they'd only heard stories about from those who'd lived before the Relocations: freedom.
©2015 Mercury Radio Arts, Inc. All rights reserved. (P)2015 Simon and Schuster, Inc. All rights reserved.


Review:
Americans no longer own their own land or choose their own jobs in this society. The people have been relocated to government compounds where they live under the dictates of the Republic authorities who make the rules. Food and water are rationed and children are separated from their parents. Emmeline was able to get a transfer to a new job working at the Children’s Village so she could be near her baby, Elsa. Then she overhears the leaders say that they are going to send the children to another location.

Emmeline has already lost her first assigned mate and her parents. Emmeline convinces her loving partner, David, to help the small family, including an 8-year-old boy, Micah, escape to the lands outside the fences. David’s parents soon follow with the hope of leading the authorities away from their children. Those seeking freedom find help from surprising sources but will they be able to outpace the armed pursuers?

The Earth Protection Agency (EPA) sends out a crew to search for the rebellious citizens. They will bring the adults back to be punished as an example to others. The children are to be brought back to the farm because they are an important resource to be raised to be obedient workers. The EPA crew is led by an experienced chief who is proud and arrogant. He is annoyed that three of his team are new, including a female trainee. This is one of the first females put into the program and he sees only one use for an attractive female out in the field.

This story picked up right where the first book, Agenda 21, ended. I questioned Emmeline and David running out with little in supplies and knowledge. Still, I enjoyed the strength of Emmeline’s independence and determination and I loved the inquisitive and helpful character of Micah as they learned to forage and find shelter. The story presents a distinct difference between the characters seeking freedom and the power hungry and selfish authorities.

The story moves at a good pace and kept me interested. I liked how the authors wove the themes of freedom and God’s grace into the action and relationship dialogues. I recommend this to readers who enjoy dystopian stories that focus on the struggle for freedom.

Audio notes: The alternating narration between Jeremy Lowell and January LaVoy makes the story move very well. They both did a good job with the characters and made the story more engaging for me.

This was from my Audible library and qualifies for Audio Challenge, TBR Triple Dog Dare and March 2016 TBR Challenge. It also qualifies for “A” in Alphabet Soup Challenge.
Posted by Martha Eskuchen at 2:30 PM