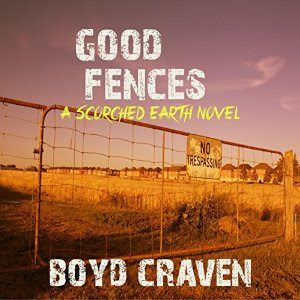 Publisher's Summary
Brian Cartwright just wants to work and run his farm in peace. The police keep showing up as the HOA from the new neighborhood keeps filing nuisance complaints against him and his farm. What makes matters worse, his former boss George and his son built a big house overlooking the farm. His prepping lifestyle and following the news online is his only other hobby other than church activities.
George's son is the teenager responsible for causing the accident that killed Brian's wife. Every interaction with the power hungry father drives him insane. To make matters worse, George's son has been trespassing and gets injured on Brian's property causing him to build bigger and taller fences.
The neighbors that once shunned Brian Cartwright now need him like never before. America has been attacked with an EMP and they find themselves requiring the help of the widowed farmer the same time he realizes he needs them as well.
When things get dicey, can they mend the wall, or do good fences make good neighbors?
©2015 Boyd Craven III (P)2015 Boyd Craven III


Review:
Brian Cartwright was happy with his life until his car was hit by a drunk driver, killing Brian’s wife. The teen driver was the son of Brian’s boss who arranged to get all charges dropped while he also cut Brian’s insurance and terminated his position. Brian moved to his family’s closed up farm where he could try to heal. Brian is a prepper and he is glad to rebuild the farm and store up supplies for days of trouble.

But all is not quiet on the farm. His old boss, George, built an upscale subdivision on the adjacent land. George is repeatedly sending the cops to the farm to complain of animal smells, gun shots or any other excuse he can make. Brian decides to raise his fences and set up a large gate trying to keep his neighbors out.

Then an EMP strike changes everything. Brian and a handful of his closest friends set up on the farm. This group includes a young widow, Lucy, and her toddler son, Spencer, who met Brian while he was building the bigger fence. The neighbors aren’t prepared for loss of power, water and food. They resent the fact that Brian and his friends have survival supplies and they begin to grumble and threaten the farmsteaders. Brian has to make hard decisions and tensions quickly build. News comes of a more brutal outside threat that is headed towards their community. Can the neighbors find a common ground and plans to help each other to move forward and to stand against the outside threat?

I was drawn in by Brian’s character and the story became even more engaging with the inclusion of Lucy and Spencer. Brian’s other friends are reasonably developed characters too. The story portrays real-to-life issues and mostly realistic difficulties and conflicts that would arise from an EMP strike. There are prepper sites and resources shared through the dialogue in addition to aspects of prepper survival. The story moves at a steady pace, is a nice length and I found it completely engaging.

I like this post-apocalyptic genre and I am interested in reading/listening to more of Mr. Craven’s Scorched Earth series. I suggest this is a must to add to reading lists for readers who enjoy the genre. I also recommend it to those who enjoy strong social and family drama. Caution – there is some foul language, which I found a shame but I still enjoyed the overall package.

Audio Notes: Kevin Pierce does a wonderful job of narration. He captures the different character voices and moves the story along. I was wrapped up in the listen and had a hard time turning it off.


I picked this up with an Audible credit recently as I received the second book for review through Audiobook Blast.
Posted by Martha Eskuchen at 9:38 PM