Giveaway and Review of A MATTER OF CLASS by Mary Balogh

"Just in time for Valentine’s Day, New York Times bestselling author Mary Balogh creates a classic historical tale that sizzles with romance and unforgettable drama. Mary Balogh’s A MATTER OF CLASS (January 2009) boasts a sweeping, historical romance in a compact novella format. Once you start reading this gem, you won’t stop until you’re rewarded with the beautiful ending."


The original of this review is posted at CataRomance Single Titles 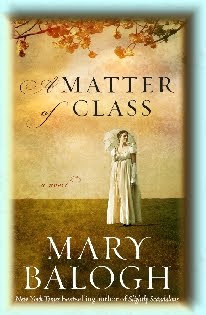 BLURB:  Reginald Mason is wealthy, refined, and, by all accounts, a gentleman. However, he is not a gentleman by birth, a factor that pains him and his father, Bernard Mason, within the Regency society that upholds station over all else. That is, until an opportunity for social advancement arises, namely, Lady Annabelle Ashton. Daughter of the Earl of Havercroft, a neighbor and enemy of the Mason family, Annabelle finds herself disgraced by a scandal, one that has left her branded as damaged goods. Besmirched by shame, the earl is only too happy to marry Annabelle off to anyone willing to have her.

Though Bernard wishes to use Annabelle to propel his family up the social ladder, his son does not wish to marry her, preferring instead to live the wild, single life he is accustomed to. With this, Bernard serves his son an ultimatum; marry Annabelle, or make do without family funds. Having no choice, Reginald consents, and enters into a hostile engagement in which the prospective bride and groom are openly antagonistic, each one resenting the other for their current state of affairs while their respective fathers revel in their suffering.

So begins an intoxicating tale rife with dark secrets, deception, and the trials of love—a story in which very little is as it seems.

REVIEW:
This novella offers an ABSOLUTELY CHARMING surprise!
I do enjoy Mary Balogh books as she writes such lovely characters and plots in historical romance.  I started this book expecting a “marriage of convenience”, if not hostility, and wondering where it would go.  Ms. Balogh did not fail to provide two families of interesting characters and a wonderful story twist!

Lady Annabelle Ashton is an Earl’s daughter who has been ruined by attempting to elope with her Father’s coachman.  The Earl is particularly upset as he expected to marry Annabelle to a wealthy mature nobleman in exchange for funds that the Earl desperately needs to recoup due to bad investments.

Reginald Mason is the only son of a wealthy businessman.  His robust father has longed to mix with The Ton and moved to an estate next door to the country home of the Earl of Havercroft in hopes of moving upward.  Unfortunately the Earl has refused to acknowledge the Masons or let his family even look at them in church!

Reginald was sent to the best schools to rub elbows with the elite of society and be prepared to marry into that society.  Reginald has spent the past year living a bit notoriously and incurring unreasonable gambling debts.  His father decides that is it time for Reginald to marry and settle down.  When Mr. Mason learns that his neighbor’s daughter is ruined he sees a perfect solution to his son’s situation and determines to buy his family an entrée into The Ton.

Reginald does not want to marry and certainly not “damaged” goods!  Lady Annabelle doesn’t want to be sold into a loveless marriage.  But does either of them have a choice?

I loved how the alternating chapters went back in time to tell a story of their own.  It took a bit of the way into the story before I got a suspicion of what was happening. When I did realize, I was ready to read the book again! By the end of the book I had fallen in love with both the hero and heroine!  This is another Balogh WINNER that you will not want to miss!

TO ENTER THE GIVEAWAY:

One ARC copy of A MATTER OF CLASS will be awarded!

A Big Thank You to Catareviews for the opportunity to review this and to Kim at Nancy J. Berland Publicist for sending this book and providing the giveaway of this lovely book!

1. Comment here telling me of another Mary Balogh book you have read or would like to read! (Use the author website link above to check other books!) Please include your email address, so that I can contact you if you win.
2. For an extra entry, become a follower or tell me if you are already a follower.
3. For another entry, share this giveaway on your blog, my space, facebook or Twitter and tell me where you shared it.
4. It is not necessary to enter separate comments unless you want them spaced out for numbering in the random number generator.
(Three total entries possible.)

This contest will close Midnight (Central) on December 23, 2009. The winner will be randomly selected from all entries.

Posted by Martha Eskuchen at 2:07 AM