I enjoyed this amateur sleuth mystery.
The Winter Mystery an absolutely gripping whodunit
by Faith Martin 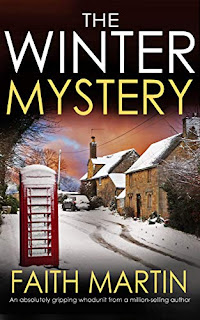 Discover a new series of whodunits by million-selling author Faith Martin. These charming mysteries will have you scratching your head to work out who the murderer is.
“Classic murder mystery story with a twist at the end” Oxford Times
Meet Jenny Starling: travelling cook and reluctant amateur detective.
Please note this book was first published as “A FATAL FALL OF SNOW” under Faith Martin’s pen name JOYCE CATO.
Jenny Starling is spending Christmas in a snowed-in country house cooking all the traditional food she loves. But the family she’s working for are not full of the seasonal spirit. In fact, they seem to hate each other.
On Christmas Eve, someone is found dead on the kitchen table. And the head of the family is blaming Jenny!
But with an incompetent detective called in, and seemingly no motive for the murder, Jenny will have to give the police a hand.
She will stop at nothing to clear her name and find the real murderer.
This is the second of a series of gripping murder mysteries with a great cast of characters and baffling crimes which will keep you in suspense to the final page.
Perfect for fans of classic whodunits by authors like Agatha Christie, LJ Ross, TE Kinsey, and J.R. Ellis.


Review:
Traveling cook, Jenny, accepts a job in a small village to cook over the Christmas holidays. She arrives after struggling through the snow to get to the house. There she finds that no one knew she was coming except the gruff, tyrant head of the household, Stan Kelton.

Jenny meets the family and learns that the household consists of Stan’s elder brother, Sid, who has been frail after an accident years before; Stan’s two grown sons, Bert and Bill; his daughter Delia; and his grandson, Jeremy, Bert’s son. Although the eldest son of the family is the legal owner of the farm, it is clear that Stan is in control… and no one is particularly happy. There is a local woman, Mrs. Jarvis, who comes in daily to clean and cook under normal circumstances. She is more than willing to explain that Stan is a brute who caused the death of her husband and ran off Bert’s wife.

Jenny is only at the home a day or two before she steps into the kitchen, turns to the table and finds Sid, (not Stan), sitting with a knife in his chest. Jenny hurries through the snow to get authorities to come to the house. When she returns, she steps in to have Stan accuse her of the crime. The inspectors are congenial, but Jenny realizes that they are not overly experienced at murder investigations. On the other hand, Jenny has gained a small reputation as she has already helped to uncover two other crimes.

If it had been Stan who was killed there would be plenty of people with motive. But who would want to kill sweet, gentle Sid? Fortunately the inspectors are willing to follow Jenny’s suggested steps to protect the scene, gather evidence and interview witnesses.

I found Jenny to be a lovely character and I liked how she handled the investigation. There are several side issues to make the reader ponder. However there are other clues for the reader to pick up so I was able to guess the motive and killer before the reveal. Still it was fun to follow the investigation. The writing was clear, easy going and moved along well. There were nice descriptions (including yummy meals) that contributed to the natural feel of the story without dragging it out. I would be glad to read more by Ms. Martin and I recommend this to reader’s who enjoy a nice cozy mystery.


Source: 2018 NetGalley. This qualifies for 2019TBR, 2019NetGalley, 2019Alphabet goals and is the Winter title for my seasons goal reading.
Posted by Martha Eskuchen at 12:26 PM