#NetGalley Book Review: Talon of Scorpio: A Novel of the Shadowstorm by G. T. Almasi

I enjoyed the prior books in this series and this is another action packed volume.

Talon of Scorpio: A Novel of the Shadowstorm
by G. T. Almasi 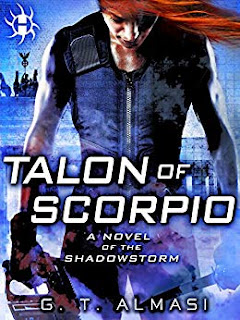 Superagent Alix Nico returns in a new Shadowstorm thriller from the author of Blades of Winter, which was hailed as “a hell-bent-for-leather mash-up of spy novel and science fiction” by Jason Bourne novelist Eric Van Lustbader.
Alix Nico, code-named Scarlet, is a one-woman demolition derby. As a top American Level, she’s a cybernetically and biologically enhanced operative fighting a Cold War among the forces of freedom, a Soviet Union that never fell, a China hungry for power, and a Germany that emerged from World War II more powerful than ever.
There’s a mole within ExOps, the covert agency responsible for the security of the United States, who has been working to decapitate the organization’s leadership. And when treason strikes, Scarlet and her partner, Darwin, find themselves matched against a rogue Level known as Talon, a merciless killing machine whose augmentations place her in a league of her own. But behind Talon lurks the real enemy, a traitor whose thirst for control threatens to upset the fragile balance of mutually assured destruction that has kept the four Great Powers from breaking into open warfare—until now.


Review:
Alix Nico, aka Scarlet, is a one-woman army… although demolition derby is perhaps more accurate. She is cybernetically and biologically enhanced, including self-administered pain medicines and calmers that she may be abusing. Alix is generally successful in her missions, working closely with her ExOps partner, Darwin, (a Patrick clone). However, her missions are more often than not messy with injuries and collateral damage.

The ExOps agency is suffering under sabotage and betrayal from a high-level mole. They know who it is but have been unable to locate him and shut him down while he continues to cause damage to the safety of United States and its international relationships. This super enemy now has his own super weapon – a rogue enhanced Level known as Talon. She has enhancements that even challenge Scarlet.

Scarlet and Darwin are off on a fast tract trip chasing Talon and her boss, enemy #1. The chase takes them to Germany, one of the four Great Powers, where havoc ensues. Can Scarlet live through the attacks of super villain Talon and get to the top enemy before he releases more chaos.

When I started to read this, I was glad that I recognized the characters and alternate world from the prior books that I read several years ago. I had to recall that the reader has to get used to the multiple character names or the reader could get lost. What I hadn’t recalled was the ugly language which makes this less enjoyable for me.

Another thing that I recall - and is consistent with this third book- is how busy and quick author Almasi moves the action, settings and characters. It is a wild ride full of fights, shoot outs and bombs. I recommend this fast-paced story to readers who enjoy non-stop action with enhanced characters.