This is romantic suspense just as I like it. 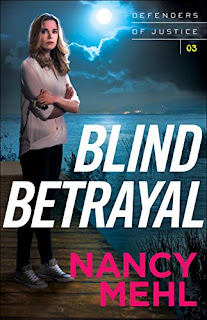 
Deputy U.S. Marshal Casey Sloane has worked at the St. Louis Marshals office for two years and is given a routine assignment to help transport a reporter to D.C. to testify before a grand jury. Valerie, the reporter, was writing a story about an up-and-coming environmentalist who suddenly disappeared and, she later discovered, whose backers purportedly have ties to a terrorist.
When the seemingly ordinary assignment suddenly takes a shocking turn, Casey is forced to put aside her own feelings about the unexpected reappearance of a man from her past as she and two other Marshals take Valerie on the run. And as it becomes dangerously clear Valerie's testimony has even bigger implications than they knew, they'll do whatever it takes to make it out alive.

Review:
Deputy U.S. Marshal Casey is assigned with her partner to transport a reporter who is expected to be a witness against a terrorist, drug cartel leader. Casey is surprised when a colleague from D.C., where she used to work, is brought in as part of the transport team. E.J. had a tendré for Casey but hid it while she dated his best friend. Neither E.J. nor his friend were happy when Casey changed offices, walking away unexpectedly.

Before the escort team can get on the road, the Marshal’s headquarters is bombed. It soon appears that someone will go to a lot of trouble to get to the witness. Casey and E.J. need to sort out the tensions between them but first they are going to need to keep the witness alive and get her to D.C.

Ms. Mehl does a good job building the suspense and tension. I enjoyed the double conflict and tension in the story: the natural dangers of protecting a witness while running from the enemy and the dangers and struggles while running from the human heart. There are miscommunications that contribute to both problems. There are some faith foundations that are shared as a part of the characters without being in anyway preachy.