This is a decent, quick fantasy.

Fury: An Urban Fantasy & Mystery (The Fae Awakening Book 1)
by Will O'Shire 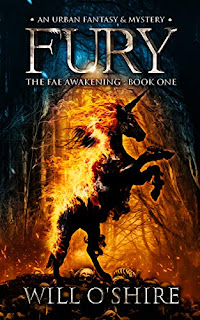 Indebted to the Fae council, Hunter investigates crimes committed by Fae beings against humanity, as required by a treaty between the human and Fae worlds. Hunter is secretly building out a large retirement fund by operating an illicit business on the side.
When Hunter returns from a botched theft overseas, he finds out his business partner, George, has taken on a job from an untrustworthy leprechaun. His team must work together to find a monstrous unicorn, covered in a black moving liquid and surrounded by flames, who has destroyed the site of a new energy project and killed several humans, leaving empty holes in their chests.
Along the way, Hunter will have to take on the protection of two young men, Brad and Andy, who have no idea the Fae world exists. They'll follow Hunter rather than risk being alone, meeting many friends, and many enemies they thought only existed in fairy tales.


Review:
Hunter is a human working in a precarious position as a human investigator of Fae crimes against humanity. He works under the watchful eye of the Fae council but still manages to secretly work side jobs (for example, unauthorized thefts) to build a retirement fund so he can exit the Fae world.

Hunter’s partner takes on an assignment from a leprechaun that no one trusts. He isn’t thrilled but the job pays very well. He and his team are to find a monstrous unicorn who is dripping black goo and flames as it kills several humans. Presumably the leprechaun is more concerned because the unicorn has destroyed a work site at one of his investment projects.

Hunter is called in by the police investigator to view the scene of one of the killings where he finds a charred building and a woman killed with a hole in her chest. While watching the video of the attack Hunter notices a specific detail that may help his search for the creature. He also becomes aware of two witnesses, humans Brad and Andy, who do not know about the Fae world. Hunter must protect them as he moves forward with his investigation.

Hunter pulls together his team members to help work on the cases. There is a woman who is a brownie who can be helpful at home until her anger rises. Then there is the bartender who I think is an ogre and a wonderfully beastly creature, Kawa, who reminds the boys of Chewbacca of Star Wars --- or maybe a Yeti? And let’s not forget the help from Henry, the gargoyle.

While Hunter and the team work to track and capture the dangerous unicorn, Hunter is trying to avoid an angry goblin who wants the ‘treasure’ he engaged Hunter to steal. Meanwhile authorities are seeking to question Kawa about some other crimes.

This is a quick, short fantasy that pulled me in. I enjoyed the crazy set of characters and the world building. The specific plot is engaging too – who doesn’t like unicorns? This story reaches an appropriate end although there is a good bit of character history and side issues that remain unanswered for further stories. I recommend this to readers who enjoy Fae related fantasy.