I can get lost in Kvothe's world and adventures.

The Name of the Wind
(Kingkiller Chronicle, Book 1)
By: Patrick Rothfuss
Narrated by: Nick Podehl 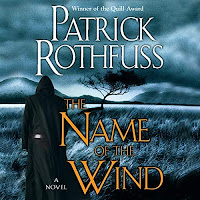 DAY ONE: THE NAME OF THE WIND
My name is Kvothe.
I have stolen princesses back from sleeping barrow kings. I burned down the town of Trebon. I have spent the night with Felurian and left with both my sanity and my life. I was expelled from the University at a younger age than most people are allowed in. I tread paths by moonlight that others fear to speak of during day. I have talked to Gods, loved women, and written songs that make the minstrels weep.
You may have heard of me.
So begins a tale unequaled in fantasy literature - the story of a hero told in his own voice. It is a tale of sorrow, a tale of survival, a tale of one man’s search for meaning in his universe, and how that search, and the indomitable will that drove it, gave birth to a legend.
©2009 DAW Trade (P)2009 Brilliance Audio, Inc.


Review:
This book introduces the bright red-haired Kote as the innkeeper at the Waystone Inn, where he has made a quiet life, trying to stay out of the limelight. Chronicler, a scribe historian, stops at the Inn and bargains to write Kote’s – or more accurately, the legendary Kvothe’s - story. So the tale begins.

Kvothe is part of a family troupe of entertainers. He is tutored by an arcanist who joined the troupe for a time and the eager young scholar longs to go to the University for arcanists. Then tragedy strikes when everyone in the caravan is killed by an assassin group, the Chandrain, who most believe to be a myth, or at very least, the stuff of legends. Kvothe escapes and runs into the woods in a shocked state of grief. After a time, he travels to a city where he is attacked and loses his most treasured possession, his lute. He soon learns to fend for himself and avoid the gangs just to survive.

After three years Kvothe, at 15, takes off to the University hoping to gain entrance. He does want to study but he also hopes to find out the secrets of the Chandrain. Kvothe impresses the chancellors and is accepted. He has struggles, makes some wonderful friends and fearsome enemies. He breaks rules and bears through punishment. He scrapes by with little and every time he manages to get some funds ahead, he plunges off on a misadventure.

This is a coming of age, action adventure story that is written with skill in language and world building. The words flow with a music that fits the tale: sometimes silence, sometimes gentle, must often troubled. The characters are well developed and the world is woven with strong detail. I had to pay attention at the beginning to sort the characters and get the gist of the story. As the book progressed, I was caught up in Kvothe’s troubles feeling his pains and few moments of joy. It is a long book – almost 28 hours on audio - but I was engaged all the way to the end. At some time I plan to continue with book 2 which is an even more intimidating 43 hours! I recommend this to readers who enjoy epic fantasy.

Audio Notes: Nick Podehl does a superb job with the narration. He captures the mystery, aloofness, sneers and other emotions, making the characters come alive. He maintains strong energy sharing as a good storyteller. I am very glad that I listened to this on audio.