Happy Friday!
I sure will be glad when everyone is well again around here! Hubby and I have struggled through our colds; getting to bed early trying to knock it out. (No reviews done though.)
The girls in the office have missed three days between them and sick children. :-(
On the heart side Hubby is still doing better. They sent a nurse to the house to make him wear the LifeVest. Apparently they need the monitoring for three months to decide if he needs a pacemaker. He is frustrated but beginning to acquiesce.
Our weather has been pretty warm except for Thursday's temperature drop to high 30s. We've had some heavy rain storms several afternoons. I had to stop twice to pull branches off our driveway.
I sure hope everyone is staying safe in these strange weather conditions.


CONGRATULATIONS
to Random.org picked Winners from February 3 Pick:
NATALIJA gets a GC.
and
RUBYNREBA gets Love Overboard 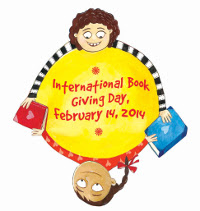 International Book Giving Day
I plan to share some books this coming week. How about you?
The  2014 Image was found at Nashville Public Library.

New Book Group #70 January 27, 2017
Thought I’d share some romances for February:
PAIRS:
Betty Neels: The Girl With Green Eyes and the Damsel in Green
Linda Howard: The Touch of Fire and Loving Forever
SINGLES:
The Devilish Pleasures of a Duke by Jillian Hunter
Kissed by Shadows (Get Connected Romances) by Jane Feather
Love's Brazen Fire by Betina Krahn
Love Letters From a Duke (The Bachelor Chronicles Book 3) by Elizabeth Boyle
Love Overboard by Janet Evanovich
Love Wild and Fair by Bertrice Small
Only With Your Love (Vallerands Book 2) by Lisa Kleypas
Scandalous Love by Brenda Joyce
Someone to Love by Jude Deveraux
Valentine by Jane Feather
A Visit From Sir Nicholas (Effington Family Book 9) by Victoria Alexander
Winter Fire by Jo Beverly

(*Three more very old books from my Gothics box.)
SINGLES:
*The Brittany Stones by Lynna Cooper (1974 - yellowed; corner of cover cut)
No Place for a Lady by Katherine Greyle
*The Man in the Garden by Paule Mason (1969 - yellowed)

SINGLES:
A Dangerous Fancy by Tracy Cozzens
The Champion by Heather Grothaus

I am happy to say that so far about 1,034+ books have found new homes! YAY. I have to update my print out to check the exact number sent out - a few were never claimed. I periodically update the lists - deleting those won. You can still go to the Friday Pick list link to see older posts and the older lists book pictures if you want!