This is an intense military action thriller that makes you think about military might and social – human --issues. (ABJ)
Goliath
By: Steve Alten
Read by: Christopher Kipiniak 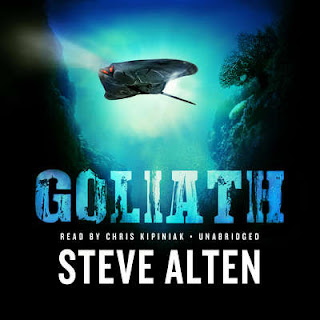 Terrorism. Acts of oppression. The threat of nuclear war. What if one madman aboard a vessel could end these fears forever?
Commander Rochelle “Rocky” Jackson is aboard the aircraft carrier USS Ronald Reagan when the “unsinkable” naval vessel and its entire fleet are attacked from the depths and sunk. As Rocky struggles to stay alive, a monstrous mechanical steel stingray surfaces, plowing through the seas it now commands.
The US Navy–designed Goliath is a futuristic nuclear stealth submarine in the shape of a stingray. Simon Covah, a brilliant scientist whose entire family were the victims of terrorism, has hijacked the sub. Believing violence is a disease, Covah aims to use the Goliath and its cache of nuclear weapons to dictate policy to the world regarding the removal of oppressive regimes and nuclear weapons.
Could the threat of violence forge a lasting peace?
But there is another player in this life-and-death chess match: unbeknownst to Covah and the Goliath crew, the Goliath’s biochemical computer brain has become self-aware—and it’s developing its own agenda.
© 2002 by Steve Alten


Review:
“Rocky” Jackson followed the footsteps of her naval officer dad by preparing for naval service. She always ranked well in grades and testing, having to push herself a bit to prove her capabilities in a man’s career. Rocky and her fiancé, Gunner, a special forces ‘hero’, worked with other specialists on a secret government project -- a huge stealth submarine known as the Goliath. The project was cancelled when Gunner destroyed the schematics on the eve of their wedding. Gunner knows he was betrayed and set up by a close friend but he refuses to reveal the truth even when convicted of treason. Rocky was devastated and wouldn’t speak to Gunner even when encouraged by her father who was once Gunner’s commanding officer.

Ten years later, the United States officials discover that the Goliath has been built in secret by the Chinese and is now in the hands of Simon Covah. Covah was one of the original scientists working on Goliath and he has inserted Sorceress, a learning biochemical computer brain, into the sub’s control matrix. Covah is set on a catastrophic plan to stop humans from more maiming wars, like the one that maimed him and took his family. Covah has programmed Sorceress with his master plan to target the worst of the world's known terrorists. But Covah hasn’t factored in the learning curve and control of Sorceress. Covah faces his own betrayals, once again proving that the best laid plans can run amok.

Rocky and Gunner are pulled in by defense specialists to stop Covah and Goliath from setting off nuclear bombs in specially targeted cities. Rocky and Gunner don’t trust each other but are forced to find a way to work together if they want to survive Covah’s sub team and Goliath’s ‘evolving’ personality.

I enjoyed the character development with hurts, scars and sometimes delirium. I also enjoyed the danger, the fast-paced action and the intense suspense. Mr. Alten blends genius with a fine line of mania that can even taint a human trained AI. The author provides a thought provoking message regarding nuclear weapons. Although interesting, the depth of detail on military weapons, submarines, carriers, specialty planes, and specialty weapons is almost overwhelming. I suspect the details are intended to give the reader a better perspective on the immensity and power of Goliath.

I recommend this to readers who enjoy military thrillers. You can always skim past the equipment details if they seem too much.

Audio Notes: Christopher Kipiniak does a fine job with the voices and accents. The characters are easily distinguishable and the narration provides good pacing, realistic emotion and fitting intensity. The narration increased my enjoyment of the story.


I received this audio book from Blackstone Audio through Audiobook Jukebox. It qualifies for 2017 Audio Challenge.