I really like the characters and the unique storyline in this. I’m ready to listen to more. 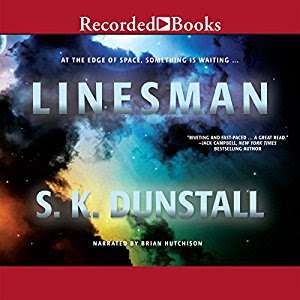 
Publisher's Summary
First in a brand-new, thought-provoking space opera series.
The lines. No ship can traverse the void without them. Only linesmen can work with them. But only Ean Lambert hears their song. And everyone thinks he's crazy.... Most slum kids never go far, certainly not becoming a level 10 linesman like Ean. Even if he's part of a small and unethical cartel, and the other linesmen disdain his self-taught methods, he's certified and working. Then a mysterious alien ship is discovered at the edges of the galaxy. Each of the major galactic powers is desperate to be the first to uncover the ship's secrets, but all they've learned is that it has the familiar lines of energy and a defense system that, once triggered, annihilates everything in a 200 kilometer radius. The vessel threatens any linesman who dares to approach it, except Ean. His unique talents may be the key to understanding this alarming new force and forever reconfiguring the relationship between humans and the ships that serve them.
©2015 S.K. Dunstall (P)2015 Recorded Books


Review:
Ean Lambert is a linesman but his skills are different than most linesmen. Lines are paths of energy which serve specific purposes on space ships. Lower lines (1 through 5) control more basic systems not needed for space travel, and these are on planets too. The technology is not completely understood and no one yet knows the purpose of lines 7 and 8. Most linesmen have a special extra sensory perception and have been taught to manipulate the lines by pushing them into place to keep them working properly. The linesmen are certified at the highest level, 1-10, that they can manipulate.

Ean’s contract is with one of the least respected cartels but Ean was glad to sign on for the training and the chance to become a linesman. His boss did manage to get him certified as a Level 10, although it was all a bit unorthodox because Ean doesn’t manipulate the lines like the others. He hears the songs of the lines and sings to them – and they respond. Ean doesn’t get the respect the other high linesmen get, but while other 10s were out at the ‘confluence’ trying to learn the secrets of an alien ship, Ean has been busy fixing lines on many ships and gaining a reputation as a reliable, if strange, linesman.

Ean’s life is suddenly changed when his contract is bought by an angry woman from the Lancastrian Princess. Ean was raised in the slums of Lancia so he doesn’t have warm feelings towards their rulers. The crew doesn’t welcome him warmly, although the lines do. Slowly the crew, especially the ship’s owner, Michelle, her high-ranking bodyguard, Abram, and eventually the ship’s captain, Helmo, begin to appreciate Ean’s unique talents. When they realize that Ean can communicate with the mysterious alien ship, he quickly becomes their secret weapon. He discovers line 11 on the alien ship, learns the purposes of the other lines and realizes that he can use the lines collectively. Which is a big help when enemies first try to attack the alien ship and then try to kidnap Ean.

I really enjoyed the relationship between Ean and the lines. (I suppose some might relate if they have a car or other object they pat and croon too.) The story is told in third person primarily focused on Ean but rotating to other characters too. One of these is Jordan Rossi, an arrogant, rival Level 10 who thinks Ean is crazy and dangerous. Ean is assigned his own bodyguard, Radko, and I like her no nonsense attitude. There is political intrigue that Ean becomes entangled in even though he doesn’t fully understand it all.

The story is full of strong, likeable characters and has a fresh storyline full of action and intrigue. The writing flows well; mostly at a quick pace. When I had to turn it off, I was anxious to get back to listen to more. This book has an appropriate ending but there is clearly more for the next book and I look forward to continuing the adventure.

Audio Notes: Brian Hutchison does a wonderful job with the narration. He gives each character their unique personality, flair and emotions, and his narration flows so well that you aren’t conscious of the reading. There are a few slower points in the story and he manages to maintain a good flow even through those. The narration definitely enhanced my enjoyment of this story and I highly recommend this in audio format.


This book is from my Audible Library (September 2016). It qualifies for my 2017 Audio, Mount TBR and “L” in Alphabet Challenge.
Posted by Martha Eskuchen at 12:16 AM