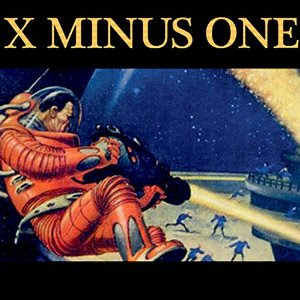 X Minus One was a half-hour science fiction radio series broadcast from April 24, 1955 to January 9, 1958, in various timeslots on NBC. Initially a revival of NBC's Dimension X (1950-51), X Minus One is widely considered among the finest science fiction dramas ever produced for radio. The first 15 episodes were new versions of Dimension X episodes, but the remainder were adaptations by NBC staff writers, including Ernest Kinoy and George Lefferts, of newly published science fiction stories by leading writers in the field, including Isaac Asimov, Ray Bradbury, Philip K. Dick, Robert A. Heinlein, Frederik Pohl, and Theodore Sturgeon, along with some original scripts by Kinoy and Lefferts.
Episodes of the show include adaptations of Robert Sheckley's "Skulking Permit", Bradbury's "Mars Is Heaven", Heinlein's "Universe" and "The Green Hills of Earth", Pohl's "The Tunnel Under the World", J. T. McIntosh's "Hallucination Orbit", Fritz Leiber's "A Pail of Air", and George Lefferts' "The Parade".
The program opened with announcer Fred Collins delivering the countdown, leading into this introduction (although later shows were partnered with Galaxy Science Fiction rather than Astounding Science Fiction):
"Countdown for blastoff.... X minus five, four, three, two, X minus one.... Fire!" [Rocket launch SFX] "From the far horizons of the unknown come transcribed tales of new dimensions in time and space. These are stories of the future; adventures in which you'll live in a million could-be years on a thousand may-be worlds. The National Broadcasting Company, in cooperation with Street and Smith, publishers of Astounding Science Fiction presents...X Minus One.
©2012 BN Publishing (P)2012 BN Publishing.


Review:
This audio book consists of stories originally broadcast on radio in 1955. The dramas are very engaging and I enjoyed the voice production and background sounds. Each story runs about 25 minutes so they are great for little snippets although the introduction and ending credits for each one become a little annoying. I could just picture an older generation sitting in front of the radio listening.

My favorite was Heinlein's “The Green Hills of Earth” which tells the tale of a space mechanic who protects the ship when automation fails. He becomes a beloved space “sailor” traveling along the freight lines and writing songs to sing on his guitar. A very special song is about the green hill of his home planet.

Another one that I really liked was George Lefferts' "The Parade". A wealthy man asks a slick public relations man in New York to prepare a plan to announce “the Martians are Coming.” The PR man is thrilled to have the high paying job and thinks the ad plan is for a new spectacular movie. The campaign will culminate in a gala parade to introduce “the Martians” to the city.

The stories are classic sci fi with the twist of irony I have come to expect in science fiction. There is a bit of humor and a strong dose of creepy horror. I do think it is fun that some of the stories treat the 1970s or '90s as a future world. I recommend this to those who enjoy vintage sci fi and like the idea of the broadcast format.

Audio Notes: If you have ever listened to an old radio broadcast you know how they are presented with good actor voices and background stories, including music building to enhance the mystery and danger.


This is from my Audible library, picked up in 2016 and planned for Vintage Sci Fi. It qualifies for my 2017 TBR and Audio challenges and “X” in Alphabet Challenge.
Posted by Martha Eskuchen at 10:57 PM