This is quite a nice historical romance.
From London with Love: Rebellious Brides
by Diana Quincy 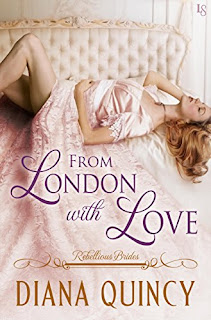 With wedding bells ringing and a killer stalking from the shadows, a former British spy makes up for lost time with the one that got away in this thrilling Regency romance from the author of Spy Fall and License to Wed.
Emilia St. George is moments away from marrying the admired grandson of a duke when the man who once jilted her decides to kidnap her at the altar. It’s the second time in five years Hamilton Sparrow has ruined her wedding day, and Emilia isn’t about to forgive him. The mere sight of her ex-fiancé revives painful memories—and, most regrettably, aching desires that refuse to be ignored.
Scanning the guests at Emilia’s wedding, Sparrow spots a familiar face: an assassin he recognizes from his days as a spy in France. Whisking Emilia away, he’s pleasantly surprised by her newly formed curves. Could this be the same flame-haired slip of a girl once promised to Sparrow? And does the fop she still insists on marrying realize what a prize she is? True, Sparrow left Emilia at the altar. But he’s afraid that the only way to right that particular wrong is to risk the one thing he’s always guarded: his heart.


Review:
Emilia is about to marry the grandson of a duke when she is swept out of the church by Hamilton Sparrow, the man who jilted her five years before. Emilia is still hurt by Hamilton’s abandonment and she doesn’t understand why he has to ruin her second wedding even if he claims that she is the target of an assassin. The fact that a bullet flies by their heads as they flee does give some strength to Sparrow’s pronouncement.

Hamilton snatched Emilia after he spotted an assassin who he recognized from his spy activities. He was quick to react and once he finds himself protecting Emilia he feels he must solve the mystery of why she is a target. Hamilton thought he had a good reason to leave Emilia behind five years earlier, but the more time he spends with her the more he thinks that he made a mistake. Yet he loved a woman once who betrayed his trust. He doesn't plan to let that happen again.

There are several potential suspects who might want her dead, even her fiancé, although he would do better if they were married first. Ms. Quincy does a good job blending the danger and mystery with the growing relationship between Hamilton and Emilia which is warm and lovely. The characters are nicely developed and make the story more engaging. There is some fun banter but also some rather base descriptions. The couple of sexual encounters are on the visual side but still tastefully done.

The story moves quickly and I enjoyed the twists and turns that complement the romance. I recommend this to readers who enjoy historical romance with a mix of mystery, and sweet, sexy romance.


I received this through NetGalley. It qualifies for my 2017 NetGalley and TBR Challenges.
Posted by Martha Eskuchen at 9:36 PM