This is a wonderful continuation and conclusion to a great series! 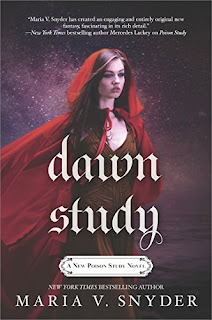 New York Times bestselling author Maria V. Snyder brings her Poison Study series to its exhilarating conclusion.
Despite the odds, Yelena and Valek have forged an irrevocable bond—and a family—that transcends borders. Now, when their two homelands stand on the brink of war, they must fight with magic and cunning to thwart an Ixian plot to invade Sitia.
Yelena seeks to break the hold of the insidious Theobroma that destroys a person's resistance to magical persuasion. But the Cartel is determined to keep influential citizens and Sitian diplomats in thrall—and Yelena at bay. With every bounty hunter after her, Yelena is forced to make a dangerous deal.
With might and magic, Valek peels back the layers of betrayal surrounding the Commander. At its rotten core lies a powerful magician…and his latest discovery. The fate of all rests upon two unlikely weapons. One may turn the tide. The other could spell the end of everything.


Review:
Pregnant Yelena and Valek are struggling to find allies to help fight the Cartel headed by Bane. The Cartel have drugged the masses of magicians and Sitians, even the Sitian army, so they believe Bane’s lies that the Commander from Ixia is planning to attack. As if that isn’t enough to worry about, Yelena needs to stay hidden as the Mosquito and other assassins have been sent to kill her. Valek sneaks out to try to remove the Mosquito only to face his own assassination attack from Onora, who has taken Valek's place as the Commander's top assassin.

Yelena and Valek have relied on help and sanctuary from Fisk and his ‘guild’ of street informers. But Fisk and his young people become targets for the enemy too. Meanwhile, Yelena’s brother Leif, his wife Mara, and Yelena’s and Leif’s father, Esau, are sure that there is a specialty plant that Bane is planning to use to further his plans for control. Before they can get to the city they are surrounded and Leif is the only one to escape.

Ari and Janco have been off on a separate mission and they have uncovered news that will be helpful if they can get it safely to Yelena and Valek. They are all too ready to jump back into the thick of things even as the allies face one dangerous situation after another. It seems almost everyone is going to risk a turn at capture and several clever rescues are required before the group can put the big rescue plan in action.

It was a joy to have all the characters, including Valek’s siblings, share in the grand scheme to save Sitia. I loved having Kiki and the other horses as active characters even if Yelena couldn’t talk to Kiki because the baby was blocking her magic. The interaction and banter among the friends – an extended family – is delightful. I liked that the love and chemistry between Yelena and Valek is clearly shared without the need for graphic scenes. I was very much impressed with how well all the details were carried forward from the earlier books and wrapped up nicely.

This has been a wonderful series and, although I was pleased with the skill of this final installment, I am sorry to see the series close. It almost makes me want to go back to the beginning and start again!


I received this through NetGalley. It qualifies for my 2017 NetGalley and TBR Challenges.
Posted by Martha Eskuchen at 10:38 PM