This is an interesting Civil War story with a sweet romance.
The Soldier's Secret
Written by: Heather Osborne
Narrated by: Kristyl Dawn Tift 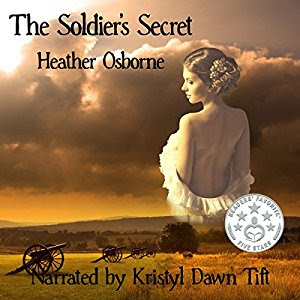 
Publisher's Summary
A picture of pure shock and curiosity, Emma placed her empty glass down, "Surely, you are not suggesting I dress as a man and enlist in the Union Army!"
"That is precisely what I am suggesting."
In an era when women are adornments, northerner Emma Mansfield finds it challenging to fit the mold. It becomes an impossible task when her country is torn apart by civil war. Knowing she must take action, Emma finds herself in the midst of danger and intrigue when she takes up the guise of a young artillery soldier for the Union Army. Desperately trying to find out if her two brothers are alive, Emma must maintain her anonymity as she fights for survival.
Please note: this is historical romance. I have represented the historical facts to the best of my ability and done countless hours of research. However, I have taken some liberties and creatively interpreted some items to make the story more entertaining. I hope you enjoy this work of fiction.
©2015 Heather Osborne (P)2015 Heather Osborne


Review:
Emma is a blossoming, proper young woman living with her family in Rochester, New York. Her father operates a local general store and her two brothers are expected to help in the store as they grow older. Emma meets the local doctor, Colin, and they quickly become enchanted with each other. But war disturbs the plans of everyone.

Will, the elder brother has determined to enlist and fight for the Union. The younger brother, Harrison, is not yet sixteen but he wants to enlist also. All the family tells Harrison that he must stay home to grow and help their father in the business. But Harrison sneaks off in anger to join the Confederates.

Emma becomes engaged to Colin but he feels the call to serve where he is badly needed. When Will’s letters to home Emma becomes more and more upset and concerned about the safety of her brothers. A local friend helps her to disguise herself so she can enlist in the Union army.

“Em” makes it through basic training successfully and sets off with her regiment hoping to find her brothers. She does find Colin and Will and is helping her own unit when she sees Harrison too. Troubles arise with a commander who becomes unreasonably obsessed with this young soldier who seems to do things right and have a charmed life. He continually harasses “Em” and they fear that her secret will be exposed. Colin and Emma make a desperate escape but the obsessed commander is not far behind.

Ms. Osborne does a good job with the vivid portrayal of the bleak hardships of war, camp life and field hospitals. The family drama seems real. There are heartbreaks and joys along the journey as Emma and Colin continue through the Appalachian Mountains trying to make their way back home without being caught by their pursuer.

The story is engaging and I liked the primary characters. I found the sexual scenes a bit more than expected for the nature of the story but it fit the passions of the couple and the basic need to cling in hard times. I recommend this to readers who like Civil War detail with a strong romance element.

Audio Notes: I had to get used to the voice of Kristyl Dawn Tift as it is a bit breathy for a war drama. It does fit the romance though and, as I got used to it, I thought that, overall, she did a good job with the voices and the emotion. I enjoyed the story in audio.


I received this audiobook from AudaVoxx for review. It qualifies for my 2017 Audio Challenge.
Posted by Martha Eskuchen at 6:31 PM