Book Review: Someone to Hold (A Westcott Novel) by Mary Balogh

Ms Balogh succeeds once again with strong, natural characters in a different situation.
Someone to Hold (A Westcott Novel)
by Mary Balogh 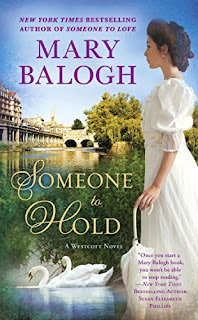 A reversal of fortune befalls a young woman in the latest Westcott novel from the New York Times bestselling author of Only a Kiss and Someone to Love.
Humphrey Wescott, Earl of Riverdale, has died, leaving behind a fortune and a scandalous secret that will forever alter the lives of his family—sending one daughter on a journey of self-discovery...
With her parents’ marriage declared bigamous, Camille Westcott is now illegitimate and without a title. Looking to eschew the trappings of her old life, she leaves London to teach at the Bath orphanage where her newly discovered half-sister lived. But even as she settles in, she must sit for a portrait commissioned by her grandmother and endure an artist who riles her every nerve.
An art teacher at the orphanage that was once his home, Joel Cunningham has been hired to paint the portrait of the haughty new teacher. But as Camille poses for Joel, their mutual contempt soon turns to desire. And it is only the bond between them that will allow them to weather the rough storm that lies ahead...


Review:
Lady Camille is a young woman who was raised as an earl’s daughter; a young lady preparing to do her duty in life. She was not concerned about controlling her life nor seeking happiness. She was only concerned with being a perfect lady, to always do what was expected of her position; to marry a man suitable to her station and to fulfill her duties as the lady of the house. Her life is turned upside down when her father dies leaving his wealth to a daughter born before he married Camille’s mother. It would be one thing if that woman was illegitimate but instead it is discovered that the earl was previously married and the marriage to her mother was bigamous, making Camille, her brother, Harry, and sister, Abigail, the illegitimate children.

Their elder half-sister, Anna, offers to share the fortune she has inherited but Camille and her full siblings refuse. The money will not change their fallen place in society, nor the fact that Camille’s fiancé spurns her with utter disdain and disgust. Their mother retreats to her brother’s home while Camille and her sister move to Bath to live as mere Misses with their Grandmother.

Camille, feeling compelled to redefine herself, takes a job as a teacher at the very orphanage where Anna grew up. Camille has no real idea what she is doing but she also has no idea who she is anymore.

Joel is an artist who was raised at the orphanage and now comes twice a week to teach art to some of the students. Camille isn’t familiar with the ‘common’ man but she is drawn to this rustic man who presents a rough version of a gentleman.

Joel resents Camille’s attitude toward his childhood crush, Anna. Yet his respect for Camille grows as he watches her creative handling of the children while struggling to sort her own self-identity. Slowly Joel and Camille develop a friendship seeking comfort in the form of ‘someone to hold’.

This story started out a bit slowly with Camille as a character who was not so easy to like. Fortunately, her character grows as the story progresses. I loved her experiences learning to feel emotions – pain and love – and the possibility of finding happiness. I also enjoyed the twists that occur in Joel’s circumstances that add a good element of irony.

Ms. Balogh succeeds in making this a delightful read with her strong, natural characters in a new, different, situation. I enjoyed this second book in the series even though I had not read the first book, Someone to Love, which is Anna’s turnabout of fortunes. I am always comfortable recommending Mary Balogh books especially to those who enjoy historical romance with strong characters without graphic sex.


I received this title through NetGalley. It qualifies for my 2017 NetGalley Challenge.
Posted by Martha Eskuchen at 10:31 PM