Audible Review: It Takes a Thief to Catch a Sunrise by Rob J. Hayes

This is a fun heist caper with duels and romance.

It Takes a Thief to Catch a Sunrise
Written by: Rob J. Hayes
Narrated by: Schatzie Schaefers 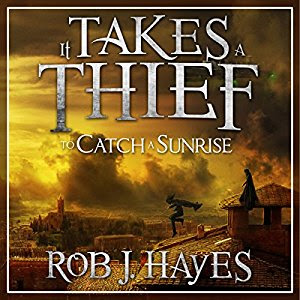 Publisher's Summary
Set in a new world of corruption, deceit and thievery; mixing magical fantasy and alchemy punk with a healthy smattering of airshippery. It Takes a Thief to Catch a Sunrise follows Jacques Revou and Isabel de Rosier, a couple of charlatans at the top of their game.
After completing the biggest heist of their career, Jacques and Isabel are ready to retire, until the king's shadow councilor freezes their assets and forces them to work for him. Jacques and Isabel find themselves thrust into the social elite, playing the parts of Baron and Baroness Bonvillain, as they attempt to uncover a plot that threatens the entire kingdom.
©2014 Rob J. Hayes (P)2016 Rob J. Hayes


Review:
Isabel and Jacques are lively and engaging characters, adventurous and creative thieves. The couple were all set to retire in comfort with the spoils of their biggest and ‘last’ heist. Then one night they find intruders in their new home. They are confronted by a mysterious, supposedly cripple man and his male and female body guards or goons. The man is the king’s shadow councilor who has frozen all of Jacques and Isabel’s assets to force them to do his bidding. They must pose as a couple known for dueling skills - Baron and Baroness Bonvillain. They are to infiltrate the local nobility to ferret out suspected conspirators who are threats to the king, queen and the newly announced, unborn heir.

Jacques and Isabel are used to play acting, so assuming the roles is not such a problem. And they are pleased with the nice mansion they are provided to decorate and occupy. But the nobility are nicer than their strong arming boss and the bodyguards who are trying to teach them to shot and fight. The problem is that Jacques has no aptitude for shooting. Plus, the ‘Baron and Baroness’ are actually making friends with some of the people they are spending time with until one of them challenges ‘the Baron’ to a duel to the death!

Jacques and Isabel do uncover a conspiracy, but it isn’t the one they expect. Looks like they need to plan a heist to save their own hides from assassination. Jacques finally gets to ride in the steamships he’s been obsessing over, if only he can keep it from being their last ride.

The story has wonderful banter and energy. Isabel and Jacques are clearly in love and willing to take risks for excitement but they have their own standards of thievery. There were good twists and bits of irony. There was good pacing although there were also some issues raised that weren’t fully explained like the mystery of the Ooze – little worms seeming to ooze and grow in the sewer tunnels.

This is a fun fantasy with steampunk airships, duels and fun romance elements. I recommend this to readers who enjoy those elements with a good conspiracy romp. This is the first story I have read by Mr. Hayes but it won’t be the last.

Audio Notes: The narration is excellent. Schatzie Schaefers provides a wonderful performance of the primary characters, conveying their energy and love. She does a good job with all the other characters too. The narration enhanced my enjoyment of the fun story.


I received this audio book from the author. This qualifies for my 2017 Audio Challenge as well as "I" in 2017 Alphabet Challenge.
Posted by Martha Eskuchen at 8:00 PM