This is a fun little read with a positive message. 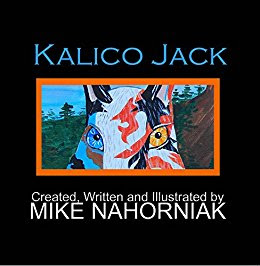 Kalico Jack is a little different from the other Jack Rabbits so much so that he is he is constantly ridiculed. As he gets old enough, Kalico Jack decides to embark on a journey to find where he fits in. This adventure takes him across the western part of the United States where he makes many friends and eventually figures out what his special purpose is.

Mike Nahorniak was born and raised in Chicago, Illinois. He is a self-taught artist who has enjoyed the adventure of living in various locations across the Western half of the United States. Some of his most famous paintings include, "Time," "Where the Antelope Play," and "Montana Moose."
He is retired from the Air Force where he served for 27 years. Mike is married with three children.

Kalico Jack is a jack rabbit with a difference – his fur is multicolored with orange and black stripes and splotches on white. Add to that two different eye colors and Kalico Jack was repeatedly made fun of by other rabbits. When he gets old enough, Kalico Jack decides to take travel west from his home in Chicago hoping to find a place where he fits in.

The story follows Kalico Jack as he passes through St. Louis and journeys west all the way to the coast Along the way he makes friends with bullfrogs, cows, wolves, various desert creatures, Big Foot and even a Martian (near Area 51 apparently). He checks out several national parks and, as he nears Devil’s Tower, he makes a surprising discovery. He decides he must return to the city to use his newly found skills to help others. That isn't easy and he faces a fearsome enemy. He knows he still has lots to learn, but now he feels he has a purpose.

The story is cute and imaginative, if a bit wacky. The images are beautiful and fun and I am sure that a print version would be a delight for children. There is obviously a message regarding being different and finding a way to accept one’s differences and make them an asset. I enjoyed the story and think it would be a fun read with a young person who likes adventure.


I received this title through NetGalley. This qualifies for 2017 TBR Challenge, NetGalley Challenge and “K” on Alphabet Challenge.
Posted by Martha Eskuchen at 8:32 PM