Guest Post: Story Ideas Ripped from the Headlines PLUS #Giveaway

Story Ideas Ripped from the Headlines
By Lauren Carr

“Where do you get your story ideas?”

“How do you come up with these ideas?”

Some readers, and a few of my relatives, think that I’ve got a twisted mind to have come up with some of my murder plots. Actually, in my own defense, I don’t always come up with the murder. Sometimes, I simply twist it around a bit.

Truth be told, often the germ of my ideas are—
Ripped from the Headlines!

Like all writers, I love stories. I like telling them, I also like hearing them. I have found that readers love to tell mystery writers stories about … you guessed it—murder. Often, it is a true story in which the story-teller will inject their own view of the facts.

Well, writers do the same thing. We just go further and actually write it down. Then we continue to twist and turn and stir and drain the facts until we come up with a book that more often than not, has no resemblance to what we had when we started out.

It’s a fact. Truth is stranger than fiction. Think about what you see in today’s headlines. Real people, especially those who are twisted, are much more imaginative than most writers. Good writers ask the right questions (usually, What if…) to make a great mystery out of it.

Such was the case for my latest Thorny Rose mystery, A Fine Year for Murder. A combination of headlines had captured my attention. From the discovery of a murder weapon, a hammer, warming up the cold case of a family murdered (Keddie Murders) to the sleepwalking defense—a defendant claiming he was innocent because he committed murder while sleepwalking.

The sleepwalking idea bloomed from a discussion at my table during a bridal shower. After a few games and sweets, the conversation turned to accidents in the bedroom. One young lady confessed that she had a tendency to be quite athletic after falling asleep. This young woman didn’t have nightmares, she just simply kicked and punched her husband. Unfortunately, she was unaware of how physical she was until after she had given him a black-eye on their honeymoon.

What if, I asked, Jessica Faraday gave Murphy a black eye on their honeymoon … as a result of nightmares … because she had witnessed a murder and had tucked the memory deep into her subconscious?

It is entirely possible. There have been numerous cases of victims of violence or witnesses to traumatic incidents repressing the memories only to have them re-emerge years, even decades later.
As these various ideas swirled around in my head, the writer in me asked What if…
there had been a tragically brutal murder of a family—a case that has long gone cold. And what if, somehow, someway, Jessica Faraday had been a witness to this murder but has buried that memory deep into her mind—only to surface in her sleep—causing her to strike out at Murphy in her terror.

The cause for her nightmares remains a mystery until investigative journalist Dallas Walker tells the couple about her latest case, known as the Pine Bridge Massacre. Then, they realize Jessica may have witnessed the murder of a family living near a winery owned by distant relatives she was visiting.

Determined to uncover the truth and find justice for the murder victims, Jessica and Murphy return to the scene of the crime with Dallas Walker, a spunky bull-headed Texan. Can this family reunion bring closure for a community touched by tragedy or will this prickly get-together bring an end to the Thorny Rose couple?

As a murder mystery writer, I don’t make up the news, I only give it a special twist from the imagination. 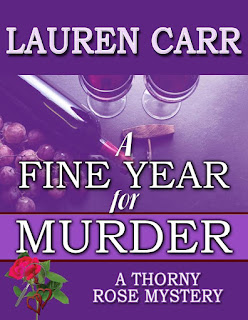 Learn more about the book and the author in the Book Spotlight Post HERE.
#mystery, #ThornyRoseMystery, #giveaway