This is an easy reading and engaging steampunk adventure. 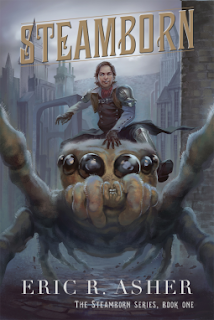 
Jacob, a tinker's apprentice and sometime thief, has lived his entire life in the mountain city of Ancora, protected by the city walls. These towering barriers keep the Deadlands creatures at bay, but the monsters move higher into the peaks every year. More and more, they breach the defenses of the Lowlands while the Highlands rest easy. A swarm overruns the walls and wreaks utter devastation on the Lowlands. Charles, the old tinker, suspects the attack may not be natural. With help from Jacob's closest friend, Alice, and Samuel, one of the city's elite spider knights, Jacob and Charles will uncover a terrible darkness at the heart of their city.


Review:
Jacob, at fifteen, is a talented tinker’s apprentice with a caring heart. He doesn’t like to steal but he does what is needed to help get medicine for his father. He and his family live in the Lowlands of Ancora and are looked down on by the wealthier families in the Highlands. The city walls were built to keep the Deadlands creatures out but the poisonous spiders and killing bugs keep encroaching. Now a frenzied swarm has destroyed most of the outer walls forcing the Lowlanders who survive to move into the Highlands. Some provide shelter and help while others pay fines rather than help the Lowlanders. Jacob’s mentor, the respected tinker, Charles, suspects that the attack was arranged.

Jacob and his friend, Alice, are exploring the old train lines and catacombs beneath the city when they hear the secret plans of a powerful conspiracy. These men want to force the Lowlanders back to their ruined and defenseless homes. Jacob and Alice have become targets to be captured and punished, if not eliminated, with the help, or coercion, of the Ancora guards, the elite Spider Knights. Charles has prepared for escape but Jacob and Alice will have to leave their families behind. They are joined by Samuel, a friend from the Spider Knights. The four set off to seek old allies in the Deadlands, with troops close behind and giant monsters in front.

When I started the book I thought it was perhaps written for middle schoolers or teens as the writing style is easy. However, as I continued I became engaged by the characters and the unique creatures. Although the wild spiders and bugs are dangerous, some of the spiders are trained as carriage ‘cattle’ or rides for the knights, and smaller bugs are raised as pets. I enjoyed watching Jacob as he helps others and begins to mature. He has a sweet friendship with Alice and wonderful teachers in Charles and Samuel. I was impressed as the world expanded beyond Ancora and I also liked the mechanical and steampunk elements of the story.

This first book has a satisfactory ending, leaving the team ready to begin another leg of their journey with new friends and new dangers. I recommend this to readers who enjoy active and creative steampunk fantasy. I hope to continue the adventure with book two and I may check out some of the other titles by Mr. Asher.


I received this title through NetGalley for an honest review. It qualifies for NetGalley Challenge, “S” in Alphabet Soup Challenge, part of TBR Triple Dog Dare and Sci Fi Experience.

Posted by Martha Eskuchen at 9:38 PM