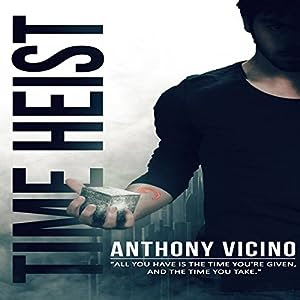 Publisher's Summary
We tried to kill ourselves. We had the weapons. We had the desire. Somehow, we failed. Humanity survived. Go figure.
They called it the Dissolution, but it's been a couple hundred years and if you ask around, nobody in Unity remembers what all the fuss was about. What everybody had been so willing to die for. Nobody cares.
I don't, at least. I've done my part. Worked Time Vice for the better part of 20 years putting the bad guys into a Stream dream. Now I want out.
The numbers on my arm tell me I'll be dead soon. Less than a day left. I can live with that. What I can't live with is knowing a Unity leader helped Malcolm Wolfe, the man who murdered my wife and a million other innocents, escape prison.
Finding Malcolm means uncovering secrets that could tear Unity apart from the inside. But if I don't stop him, there probably won't be a Unity to save anyhow.
Looks like we might get a chance to wipe ourselves out after all. Now I just got to catch him before my numbers catch me.
©2014 Anthony Vicino (P)2015 Anthony Vicino


Review:
Tom Mandel was once a well-respected Time Vice cop. Now he is counting down the last day of his government allotted time, drowning his sorrows and regrets in the lower slums of a polluted world. Tom doesn’t particular care that he is going to die since it will allow him to exit his drug hazed life and join his wife, Diana, in death. He even trades his most valuable possession, a key that connects him to Diana, in exchange for not being given more time to work off a debt.

At least Tom didn’t care about dying until his old partner and friend, Alaina Raines, wakes him from a stupor to tell him that Malcolm Wolfe has escaped prison. Malcolm is the man who murdered Tom’s wife, along with millions of other innocent people. In spite of his degraded condition, Tom will use his last breath to try stop Malcolm from killing the rest of humanity.

Tom and Alaina set off to investigate, barging in on the prison warden to learn how the escape happened. They soon learn that a highly influential Unity leader facilitated the escape. Now Tom and Alaina are dodging the authorities, even as they brazenly confront the Unity council. Tom and Alaina face certain death until they are surprisingly helped by a super talented fighting girl and an old man. As Tom learns more about a rebellion conspiracy, he begins to learn secrets about his own past. He knew he had lost memories, stolen by Malcolm, but he had no idea the extent of his loss or the part he was designed to play in the rebellion.

This story is full of futuristic themes of life controls and high tech technology that includes nanites of all sorts: healing, weapon, protective and killing nanites. There are creative vehicles, creative clothing and of course creative weapons. The story twists and turns with secrets while Tom suffers one pummeling after another. (Really? How many beatings can one guy survive? I guess as many as are offered until your time clock punches out.) There are also the age old themes of power, political and financial greed.

The primary characters are intense and strongly flawed. The addiction aspects are interesting even as they are repellent. I enjoyed the rather resigned, bit dark, tone of the story told from Tom’s first person point of view.

This is a story that bears re-reading (or re-listening) as the reader untangles the twists to a bit of a surprise ending. I think it would make a good movie; one you would watch several times to make sure you get all the hints and keep track of the political intrigue and the players. It is a story about time but not time travel as I initially thought. I recommend this to readers who enjoy strong futuristic intrigue and action.

Audio Notes: Adam Verner does a grand job with the narration. He captures the mix of laconic, dark, intense and determined moods of Tom. Verner also provided suitable voices for the other characters, including an appropriate creepy and sinister tone for Malcolm. The audio enhanced my enjoyment of the book and I would like to hear other novels narrated by Verner.


I am thankful to have received this audio title from the author for an honest review. This qualifies for Audio Challenge, "T" on Alphabet Challenge and TBR Triple Dare.

AUTHOR'S GENEROUS GIVEAWAY
Three copies of eBook (format choice of winners)
One copy of the Audiobook (through Audible gift)!

(Don't forget to fill in the form for entry!
I have noticed a few commenters who forgot to enter through the Form.)
For 3 Extra Bonus entries
(a) comment on the review, OR
(b) Visit the AUTHOR'S WEBSITE and tell me something you learned or like there.