This is an engaging and interesting listen. 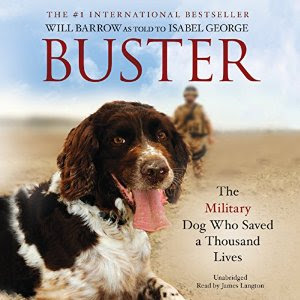 Publisher's Summary
"With some dogs you share a boil-in-the-bag breakfast and maybe a blanket on a cold desert floor. Some you wouldn't leave in charge of your Grandma unless you wanted to find out just how fast the old girl could run. But if you're very, very lucky, there will be the one dog you would lay down your life for - and for me that dog is Buster."
Buster, an English springer spaniel who has served his comrades and his country with unstinting devotion, has saved thousands of lives. This is the story of his partnership with RAF Police Sergeant Will Barrow, told by Will himself, describing how each came to save the other's life. It is a relationship that produced some heroic feats - including sniffing out explosive vests that led to the arrests of two suicide bombers - in the dust and desert heat of Afghanistan and beyond.
Buster, uniquely, has served five tours of duty in three theaters of war (Bosnia, Iraq, and Afghanistan) - more than any other military dog. He also won the prestigious Crufts Friends for Life Award in 2012 and has gone on to become the official lifetime mascot of the RAF Police, the only dog in history to have been honored in that manner. A best friend in dog's clothing, an RAF dog with his mossy feet firmly on the ground, Buster is truly a dog in a million.
©2015 Will Barrow (P)2015 Blackstone Audio, Inc.


Review:
This audiobook shares the story of how Buster becomes RAF Police Sergeant Will Barrow’s partner. They travel on several active war tours in Bosnia, Iraq and Afghanistan. Buster actually served five tours although not all were with Will. Although Will and Buster face danger in many different search scenarios, there is no real gore shared. The story is told by Will, giving descriptions of their bases and desert dwellings and providing wonderful images of Buster’s friendly personality. The book makes it clear that Buster, and dogs like him, help provide strength and courage to their partners and to other troop members who are grateful to know the skills and talents the dogs bring to the arena.

We often think of military or search dogs as German Shepherds or maybe Labradors. But Buster is a springer spaniel search dog. I love how the author portrays Buster’s human-like emotions and expressions. He reflects friendliness, sarcasm and stubbornness to name just a few. Buster sounds like a dog you would love to give a big hug to. I recommend this to readers who like dogs and those interested in how a military dog works in his search modes.

Audio Notes: James Langton does a nice job with the narration. The accent fits the author and provides an easy and direct presentation.


I received this audio from the publisher through Audiobook Jukebox. It qualifies for my Audiobook Challenge, B in the Alphabet Soup Challenge, and Triple Dog Dare.