Another engaging installment in this fun series although the forward movement is a small step. 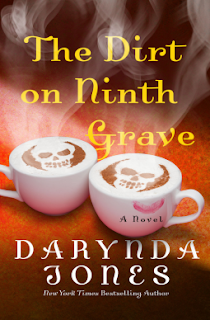 In a small village in New York lives Jane Doe, a girl with no memory of who she is or where she came from. So when she is working at a diner and slowly begins to realize she can see dead people, she's more than a little taken aback. Stranger still are the people entering her life. They seem to know things about her. Things they hide with lies and half-truths. Soon, she senses something far darker. A force that wants to cause her harm, she is sure of it. Her saving grace comes in the form of a new friend she feels she can confide in and the fry cook, a devastatingly handsome man whose smile is breathtaking and touch is scalding. He stays close, and she almost feels safe with him around.

But no one can outrun their past, and the more lies that swirl around her-even from her new and trusted friends-the more disoriented she becomes, until she is confronted by a man who claims to have been sent to kill her. Sent by the darkest force in the universe. A force that absolutely will not stop until she is dead. Thankfully, she has a Rottweiler. But that doesn't help in her quest to find her identity and recover what she's lost. That will take all her courage and a touch of the power she feels flowing like electricity through her veins. She almost feels sorry for him. The devil in blue jeans. The disarming fry cook who lies with every breath he takes. She will get to the bottom of what he knows if it kills her. Or him. Either way.


Review:
Charley has found herself in Sleepy Hollow, New York, with no memory of who, or what, she is. She has been hired as a waitress at the local diner and is glad to have found a friend in another waitress, Cookie. Cookie is there with her new husband, Robert. There are regulars at the diner including, Garrett, Osh and the devastatingly handsome and alluring, Reyes. There are others too, including a few that Charley, aka “Janey”, recognizes as ghosts although she doesn’t want to acknowledge that she can see them.

Janey is hounded a bit by Ian, the local cop who first found her. Ian seems the hardest one to convince that they are no more than friends. Janey is determined to pay her own way until she can recall who she is. Others have offered help and she will borrow the car from her elderly neighbor because she can do errands for her and bring her groceries. But she won’t take actual gifts, even from Reyes as he shows sincere concern for her and they grow closer.

As usual form, Janey/Charley has a few mysteries to solve, including an evil spirit that is killing children of another co-worker and a neighbor businessman whose family has been taken hostage as a crew of Russians digs under his building to another neighboring building. Janey doesn’t want to expose the family to danger so she tells “Bobert” (Cookie’s hubby, Robert) in hopes he can find an unobtrusive way to help. Janey may be able to solve the local problems but she doesn’t recognize the larger danger stalking her.

I really enjoyed having all the usual characters surrounding Charley even though they wouldn’t let her know her background. They are supposedly keeping an eye on her with team tag surveillance but somehow she slips through the cracks. It was a surprise, and emotional moment, how she finally regains her memory.

I think this one could have used a little more backstory earlier to refresh my memory from book eight, but the gap was filled in later so all was fine. The book is full of the usual Charley snarkiness, complete with coffee addiction, T-shirt and internet quotes, and, of course, lust for Reyes.There is even a headless horseman. For the most part I enjoyed the action, the upheaval of emotion, danger and the underlying sense of love even during the balancing of good versus evil.There is still mystery and danger to be unraveled in future books.

What I didn’t enjoy was the totally unnecessary use of the “F” word. Really? What does that add that the author and editors feel it has to be included? Yuck. I keep hoping it will stop but I guess not. I either live with it and keep reading or say “that’s enough” and find some other series to read/listen to. I am glad I received this from Net Galley for review so I wasn’t paying for that language.

This is the first time I have read a Charely Davidson novel instead of listening. Although I missed Lorelei King’s wonderful narration, I was able to hear a lot of it in my mind so I’m not sorry I snagged this for review while I could. I do recommend the book and series as good entertainment, just with the caution that it does contain language that is offensive to some of us.


I received this through NetGalley. Title Release date 1/12/16. This is part of my NetGalley Challenge and TBR Triple Dare.