This has strong characters and a great blend of suspense, story and romance.
Extreme Honor (True Heroes)
by Piper J. Drake 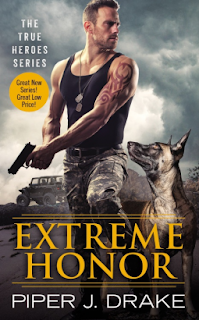 HONOR, LOYALTY, LOVE
David Cruz is good at two things: war and training dogs. The ex-soldier's toughest case is Atlas, a Belgian Malinois whose handler died in combat. Nobody at Hope's Crossing kennel can break through the animal's grief. That is, until dog whisperer Evelyn Jones walks into the facility . . . and into Atlas's heart. David hates to admit that the curvy blonde's mesmerizing effect isn't limited to canines. But when Lyn's work with Atlas puts her in danger, David will do anything to protect her.
Lyn realizes that David's own battle scars make him uniquely qualified for his job as a trainer. Tough as nails yet gentle when it counts, he's gotten closer to Atlas than anyone else-and he's willing to put his hard-wired suspicion aside to let her do the same. But someone desperate enough to kill doesn't want Lyn working with Atlas. Now only teamwork, trust, and courage can save two troubled hearts and the dog who loves them both . . .


Review:
Lyn is a civilian dog trainer. She loves dogs and relates to them – usually better than to their human handlers or owners. She has developed her own business even through the discouragement from her military stepfather who has never really given her approval or loving support. They are always at odds yet he helped her get her latest contract to work with Atlas, a a Belgian Malinois military dog who lost his handler and is struggling to show interest in life. Lyn is determined to help Atlas but first she has to get past his current trainer, former military soldier, David Cruz.

Although Lyn’s initial approach to Cruz doesn’t work, the fact that Atlas responds to her does. Cruz slowly begins to gain respect for the pretty trainer as he sees progress in Atlas’ attitude. Cruz isn't sure of Lynn's motives and plans to challenge her. When he shows up at her hotel to find her under attack his attitude quickly shifts to protective mode.

Another attack at the kennel grounds makes it clear that someone is interested in keeping Lyn from working with Atlas. It appears that Atlas may be carrying secrets that someone is willing to kill to keep hidden. Now Cruz is even more determined to discover the secrets that surround Atlas.

I immediately liked the tone of this story. Lyn is a great character as a independent, smart professional who is vulnerable yet pushes back when under attack or trauma. David is a very honorable man who is willing to listen, provide truths and is reluctant to take advantage of a traumatized woman. There is lovely conflict and tension that builds to danger and suspense, and gentle, but clear attraction that builds to strong romantic love making that is sexy but not overdone. Atlas is a dog with personality that has to be drawn out and I enjoyed the addition of the dog training details, including the introduction of other handlers and dogs.

The story is told in third person with the point of view shifting between Lyn and Cruz. This gives good balance and good character depth. There is some background done through a form of “telling”, talking to the dog, but it worked for me and I had no problem with the presentation. The writing flows easily and I finished this in two days. I carried it around with me and read every chance I got as it was a book I didn’t want to put down.

This is the first time I have read this author but I am sure it will not be the last. I recommend this to readers who enjoy good romantic suspense – heavy on the story and suspense with a strong romance that doesn’t overtake the storyline.


I received this through NetGalley. It qualifies for my NetGalley Challenge, E on Alphabet Soup and TBR Triple Dog Dare.

Piper J. Drake (or "PJ") spent her childhood pretending to study for the SATs by reading every 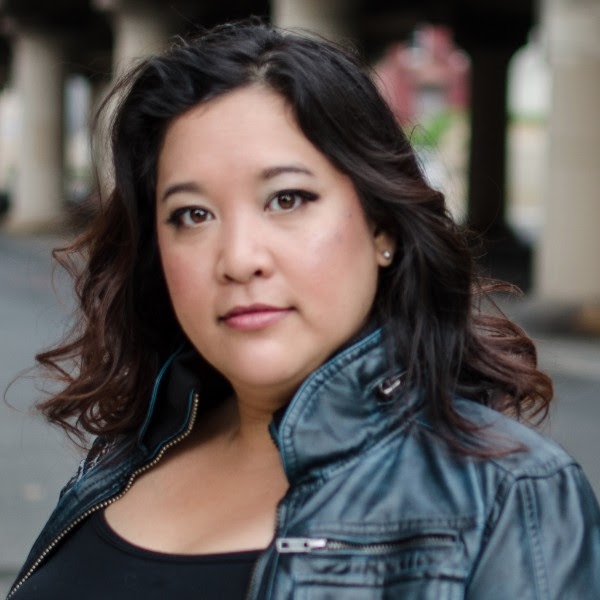 interesting novel she could borrow from the local and school libraries. She was introduced to the wonderful world of romance by her best friend and dove into the genre.

PJ began her writing career as "PJ Schnyder" writing sci-fi & paranormal romance and steampunk. She has recently received the FF&P PRISM award for her work as well as the NJRW Golden Leaf award and Parsec award.

Now, PJ is exploring the complexity of romantic suspense, incorporating her interests in mixed martial arts and the military into her writing.