This is a well written sci fi thriller with social parallels and lots of suspense. 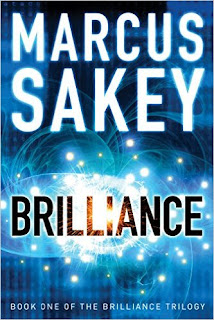 In Wyoming, a little girl reads people’s darkest secrets by the way they fold their arms. In New York, a man sensing patterns in the stock market racks up $300 billion. In Chicago, a woman can go invisible by being where no one is looking. They’re called “brilliants,” and since 1980, one percent of people have been born this way. Nick Cooper is among them; a federal agent, Cooper has gifts rendering him exceptional at hunting terrorists. His latest target may be the most dangerous man alive, a brilliant drenched in blood and intent on provoking civil war. But to catch him, Cooper will have to violate everything he believes in—and betray his own kind.
From Marcus Sakey, “a modern master of suspense” (Chicago Sun-Times) and “one of our best storytellers” (Michael Connelly), comes an adventure that’s at once breakneck thriller and shrewd social commentary; a gripping tale of a world fundamentally different and yet horrifyingly similar to our own, where being born gifted can be a terrible curse.
A 2013 Edgar Award Nominee
“The kind of story you’ve never read before.” —Lee Child, New York Times bestselling author of the Jack Reacher Series
“Ridiculously good. I love this story so much.” —Gillian Flynn, New York Times bestselling author of Gone Girl
Nominated for the Edgar, Lovey, Sideways, and Prometheus awards.


Review:
Nick Cooper is a federal agent in a special division (Department of Analysis and Response, Equitable Services) whose job is to hunt down “Brilliants” deemed to be terrorists. “Brilliants” are humans gifted with extraordinary skills. The skills may be reading the emotions of others, being able to move with great speed or stealth, being able to instantly see patterns in movement or numbers, and other “extra” skills that help the Brilliants excel beyond the normal humans. Although the Brilliants, aka “abnorms”, make up only a small portion of the population their high level of achievement frighten the normal people causing authorities to seek ways to control the Brilliants.

Cooper is extremely successful as a DAR agent since he himself is a one of those Brilliants. The team has a particular target terrorist, John Smith, who has evaded them for years. Smith is accused of a massacre of a Senator and 70+ other innocent civilians. He is also suspected of planning an upcoming bombing. As Cooper gets closer to the target, he begins to learn facts about the treatment of gifted children who are tested at age 8 and removed from their homes to be raised in academies. Cooper has cause for concern when the testing issue impacts his own family.

When Cooper runs into blocks trying to get Smith, he decides to go undercover to try to infiltrate Smith’s organization. Cooper collides with Shannon who is suspected to be one of Smith’s top operatives. Their joint escape from attacking DAR agents leads to a prime opportunity to get close to Smith. The people Cooper meets and the facts he uncovers will change his world.

The writing is crisp which fits the intensity of the talents of the Brilliants. I really enjoyed the creative observational details shared as part of Cooper’s skills. Cooper’s character is well developed, including building the relationship with his ex-wife and children. There are interesting pieces of news articles or songs that begin or end chapters and help to create an atmosphere of racial tension in this alternate society. The author uses this as one parallel with our real-life conflicts and conspiracies.

This is a good page-turner with twists and (suspected but still) surprises. There is just a touch of sexual grittiness but not enough to mar the overall engaging and remarkable effect of the work. The sci-fi element is an alternate society world and should not deter the interest of those who love a well crafted, fast paced thriller. I highly recommend this and I look forward to continuing in the series!

I received this through NetGalley. This is a contemporary Sci Fi for Sci Fi Experience. It qualifies for my NetGalley challenge, “B” for Alphabet Soup Challenge and TBR Triple Dog Dare.
Posted by Martha Eskuchen at 6:21 PM